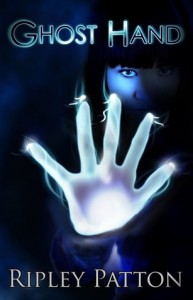 I recently ‘met’ Ripley Patton through Goodreads, over our mutual appreciation of Mary Holland‘s writing. I’ve had her novel Ghost Hand floating around in Kindleland for a while now (she sent it to me some time prior for review), so I thought I’d give it a read. We obviously have similar taste in books after all.

Description:
Olivia Black just discovered that her ghost hand, a rare birth defect, can do more than light up a room. It can reach into people and pull things out. Things from the darkest depths of the human psyche never meant to exist in this world.

Olivia can pickpocket the soul.

But she can’t control her ability, or the strange items it extracts, and the only thing between Olivia and the men bent on taking the power of her hand is a boy she barely knows and doesn’t trust.

Review:
Ghost Hand really shouldn’t be a book I enjoyed as much as I did. I’ve had rotten luck with YA novels lately and I generally dislike first person narratives. (I spend too much time wondering why they’re telling their story in the first place.) But I did like it and I’ll tell you what makes it such a good book in my opinion. It’s the fact that even if geared toward young adults and regularly reminding the reader that the characters are in their teens, Olivia and Marcus behave in a mature, rational manner. Yes, their limited by their adolescence. They can’t always assert their will over their parent’s for example, but that doesn’t mean they have to act like children. And they don’t. I liked that about them.

Their characterisations were interesting too. Olivia seemed to fall somewhere between a Goth and an Emo (which I haven’t seen in too many books), without feeling overly dark. She was witty and sarcastic, both in her dialogue and her narrations. Marcus, was your basic militant hero with a wounded past, but he felt approachable and realistic. There was a little of the classic YA distraction between the two of them. Things like Olivia being overly aware of his biceps while in mortal danger, but it is a YA novel after all. Hormones will do that to you I suppose.

My only real complaints are that what PSS actually is was left a little vague. Is it the medical term for people with appendages like Olivia’s, the actual hand, or some sort of energy residing within? This lack of clarity didn’t effect the pleasure of the story, but I was left scratching my head a little. And I would have liked a little more closure in the Olivia/Sophia situation. As this is the first in a series I know there is time for that to happen, but it felt unfinished in that regard. Speaking of series, it’s worth pointing out that Ghost Hand has a satisfying wrap up before ending. It’s also well written and well edited.