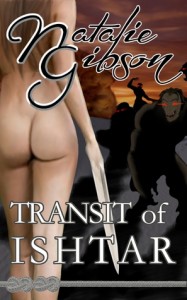 Description from Goodreads:
Nathalia Lovejoy should be dead, she can remember committing suicide, but she wakes up in a ancient tomb. Her voice destroyed, she must rely on a new source for her magical ability, telepathy, in order to communicate with her savior. Nathalia has a real distaste for men. Lucky for her, Eiran Kafziel is not a man. He is a demigod, a halfbreed, unlike anything she has ever known. He found her in the moment of her death, repaired her body, gave her his holy blood, forever changing her into a Sinnis. She must come to terms with the fact that she is attracted to him, even loves him.

Along the way she discovers a whole world of mythical creatures living among humans. She battles her own hunger for violence and releases a demon from his 500 year prison. Can she become the weapon against that newly freed evil and save the world from his plans, or is she better suited to be his dark queen?

Somewhat spoilerish Review:
I have to be honest. While a fine story, I didn’t like Transit of Ishtar as much as its prequel, Ishtar Bound. It was a very different book. It really gets the Sinnis series rolling and while Ishtar Bound was relatively self-contained this one felt very much like the start of something bigger. There were a lot of explanations that will, no doubt, carry through the rest of the series. On the up side of that, a number of the questions I was left with at the end of the last book were answered here. That was nice. I appreciated that.

There was also a lot more sex. After finishing Ishtar Bound I commented that I didn’t think it earned it’s erotica stripes. This one does, no doubt about it. It wasn’t really my type of sex though (and that’s my one main hang up on this one). I know that sounds weird. We all have preferences about different things. In this case, I’m not a huge fan of the overly dominant male sex partner. I have no problem with the alpha male or even male dominance in sex, but there is such thing as too much. And for me it’s the type where he allows his partner almost no freedom and whose behaviour if phrased differently would plainly be abusive. I just don’t find that sexy.

Natalia really could have just been a blow up doll at one point for as much control she had and conscious contribution made. It makes whole scenes feel like a rape even when they aren’t, no matter how many times the reader is reminded that she is enjoying it (and that’s on top of the actual and inferred rapes in the book). But I have a particular problem with it when the woman involved was until that point a staunch femi-nazi lesbian. I mean she HATED men and would have never allowed herself to be so dominated by one. On more than one such occasion I wanted to snarl on her behalf. It didn’t at all fit her personality. Having sex with a man at all was a stretch, but then to enjoy rough, dominated sex just wasn’t reconcilable.

I also had questions about what I’ve deemed ‘the Michael question.’ Nathalia was fairly clearly presented as a sexual as well as physical victim of Michael in Ishtar Bound. She was even forced to play some sort of relief game, where she had to get him off before passing out from asphyxiation while he strangled her. But she’s still a virgin (her hymn is intact), is shown in this book to have never gone down on a man before and doesn’t appeared to have been raped in any other fashion. So, I’m left wondering what exactly it is that he actually did. I ask because Natalia was simultaneously, or rather intermittently presented as having both a history of sexual abuse and being completely naive about male/female sex. I’m fairly sure that at least in this case the two are mutually exclusive.

Then there were the prehensile wings, which Eiran often used as an extra set of hands. It was just plain strange. I couldn’t help imagining all that old Japanese anime full of tentacle rape (or shokushu goukan according to Wiki). It was a little bit too much for me and that’s before I even address the vibrating penis.

Here’s the rub though. Even as I cringed and occasionally snarled it was still pretty hot, the teaser for book three even more so. It’s apparently a m/f/m and m/m/f grouping. But the whole thing is beginning to feel like in order to up the anti each book is moving farther and farther into the extreme. The first book had a purposefully dominant male/female pairing establishing a mutually loving relationship. This one had a previously reluctant female lead with a unremittingly dominant and almost cruel male (though only during sex). The next moves into threesomes, bisexuality and BSMD. I’m afraid to ask where the fourth will go. Snuff? [BTW, I’m not in any way comparing those, just pointing out that the themes seem to be escalating.]

Complain as I might I still have to give major props for an original story and wonderful writing. I’m even tempted to give book three a shot, ’cause the teaser really was steamy and I like m/m pairings. But I am a little afraid that two men and one woman just means two men to use the one woman. There was already a little of that in the preview, with the whole ‘cage our little birdie’ bit and seems to be the president in the first two books. Though I really don’t think that is the intended message in any of these books, that’s how the sex in them all so far feels to me and I find it off putting. In fact, it’s my only real, though major, criticism of the novel. And it’s one others may not share.

I am 100% aware that my opinions are just that, my opinions. Others may or may not agree or feel the same. I like the story set up in this book for the rest of the series, I generally like the characters and, though I find the tone distasteful, the sex is hot (even if I admit that begrudgingly). You’ll have to decide for yourself if it’s the sort of thing you’ll like or not.