I accepted a review copy of Come True, by Brindi Quinn. It’s also featured over on Sadie’s Spotlight. So, you can hop over there for an excerpt, author information, tour schedule and a chance to win a copy of the book!

★A jaded girl. A persistent genie. A contest of souls.★

Recent college graduate Dolly Jones has spent the last year stubbornly trying to atone for a mistake that cost her everything. She doesn’t go out, she doesn’t make new friends and she sure as hell doesn’t treat herself to things she hasn’t earned, but when her most recent thrift store purchase proves home to a hot, magical genie determined to draw out her darkest desires in exchange for a taste of her soul, Dolly’s restraint, and patience, will be put to the test.

Newbie genie Velis Reilhander will do anything to beat his older half-brothers in a soul-collecting contest that will determine the next heir to their family estate, even if it means coaxing desire out of the least palatable human he’s ever contracted. As a djinn from a ‘polluted’ bloodline, Velis knows what it’s like to work twice as hard as everyone else, and he won’t let anyone—not even Dolly f*cking Jones—stand in the way of his birthright. He just needs to figure out her heart’s greatest desire before his asshole brothers can get to her first.

Honestly, I think this cover sets you up perfectly for what to expect in the book. It’s super cute. Both characters are believably in their early 20s and have been through some shit. But then they come together and heal each-others’ wounds. It’s adorable and feel good. The writing is clean and easy to write and the world is interesting.

I did think there were a few too-convenient characters changes toward the end, notably Arrik and the father. They are one way the whole book and then as soon as the plot requires it they had sudden, questionable changes in character. It was more striking with Arrik, but I think more 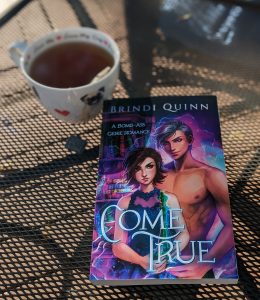 galling with the father. Because it was so patently predictable.

Additionally, but much smaller of an issue, Dolly is referred to as squishy and such more than once, which I took to mean she wasn’t thin. This I would appreciate, except that she’d had herself on a punishing ascetic diet for 50 weeks. I have a hard time thinking she’d have much squish left.

All in all, however, I really enjoyed this and will be back for more of Quinn’s writing.