I borrowed the audio edition of Guild Codex: Demonized series (by Annette Marie) through Hoopla. I’ve seen the covers around and thought they looked cool. I put off reading the series though, because New Adult fantasy can be too Young Adult-ish for me sometimes. (There’s only a thin line between an upper teen and a lower twenties-something, after all.)

I had a whole trip with this series. I didn’t realize that it’s a spin off (or at least set in the same world as) The Guild Codex: Spellbound when I first picked it up. It’s obvious when the names are put next to one another like this, but I hadn’t been paying attention. The funny thing is that I didn’t make the connection until I’d finished Taming Demons for Beginners and went looking for book two. Then, I had to recognize that I’d actually even read book one of The Guild Codex: Spellbound  (Three Mages and a Margarita), which was probably why some of the side character of Taming Demons For Beginners felt familiar. But I really was oblivious to the overlap until that moment. I had a good laugh at myself. 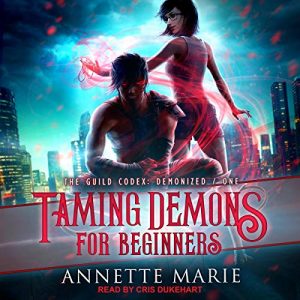 Rule one: Don’t look at the demon.

When I arrived at my uncle’s house, I expected my relatives to be like me—outcast sorcerers who don’t practice magic. I was right about the sorcery, but wrong about everything else.

My uncle chose a far deadlier power. He calls creatures of darkness into our world, binds them into service contracts, and sells them to the highest bidder. And I’m supposed to act like I don’t know how illegal and dangerous it is.

This wasn’t exactly what I expected, but I found that I enjoyed what it turned out to be. I liked Robin. She was mousey when faced with confrontation, but a dragon when left to her own devices to do the right thing. Her demon (I’m not even gonna try and spell his name since I

listened to the audio) was marvelously sarcastic. But what I really liked was that he wasn’t The Biggest and The Baddest. He’s plenty tough, but not brutish and more interested in being sneaky and smart than physically strongest.

As I said, I’ve come to understand this is part of a bigger world, containing several series. I didn’t know this when I picked the book up. But I also didn’t feel I was missing anything for having not read them. I understood the world, magic systems, etc. Though I will admit that a couple side characters have that cameo feel and I wonder if they are from other series.

All in all, I think dive right into book two. 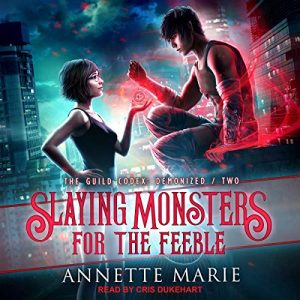 I’m bound to a demon.

For my entire life, I avoided magic at all costs. Now, I’m responsible for a demon who wields magic more powerful than the toughest mage or sorcerer.

That’s what my textbooks say. That’s what I see. He’s ruthless, he’s temperamental, he’s cold. But he protects me without fail. I wonder if he’s hiding a heart behind his hostility.

My demon is a monster.

Whether he’s heartless or not, my contract with him is illegal and beyond dangerous. Together, we must find a way to return him to his own world before anyone discovers our secret. If that wasn’t bad enough, I’ve come to realize something else:

My demon isn’t the only monster I should be worried about.

This was was a fun continuation of the series. It felt a little like the middle book it is, but I still enjoyed it. I very much enjoyed watching Robin and her demon get to know one another. (Again, I’m not trying to spell his name.) We met more guild members here and that was fun too. The villain was starting to feel a little too all-powerful, but they are definite a Big Baddie. I dove immediately into book three. 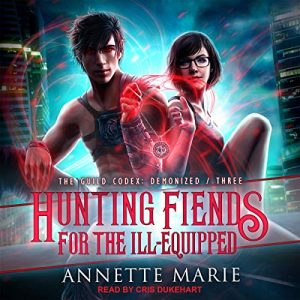 I thought I understood power.

My parents taught me that magic attracts equal danger, and everything I’ve seen since becoming a demon contractor confirms it. I’ve witnessed how power twists and corrupts–and I’ve tasted power no human should wield.

I thought I knew greed.

Ambition and avarice drove my family into hiding. My parents died for someone else’s greed. I’ve never hunted anything in my life, but now I’m hunting their killer–with my demon’s help.

But with each step closer to my parents’ murderer, I’m uncovering a different sort of evil, piece by hidden piece. I’ve stumbled into an insidious web that silently, secretly ensnares everything it touches. My demon and I came as the hunters…

I sped through this series, listening to them literally back to back. Needless to say, that means I was enjoying it. Like with the previous books, I liked seeing Robing and her demon recognize and settle cultural difference. I liked Robin’s constant attempt to do the right thing in face of problems and enemies far larger than herself. I did think the uncle’s sudden change of heart felt like a drastic and unbelievable shift in character though. 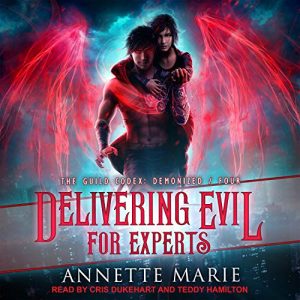 I promised to avenge my parents.

But their killer is still on the loose, and he’s stolen more than my parents’ lives. Now, as he draws closer to his mysterious goals, he’s poised to destroy what little I have left.

I promised to translate an ancient grimoire.

But it holds the secrets of my family—and the secret history of demon summoning. I fear its answers as much as I need them. Who was the foremother of Demonica…and who am I?

I promised to send my demon home.

But I promised—and I will keep my promises even if they cost me my heart, my soul, and my life.

I found myself finishing this last book in the Guild Codex Demonized series in a shockingly short time. (I’m series. I think I finished the 4 books in 3 days!) I enjoyed it all the way to the end. I did think the ending was a little predictable and I thought there were a few too many hurt feelings and misunderstandings for two people who could read each other minds (even if only some of the time). But I also like seeing the two of them work their problems out and really come to trust one another. I’m going to have to actually come back around and read the Guild Codex: Spellbound series now. I enjoyed Three Mages and a Margarita when I listened to it in 2019. I think I meant to finish the series then, but got distracted.