I’ve actually owned Eli Easton‘s How to Howl at the Moon since February of 2019. But I picked it up to read now because I recently set myself a Christmas Challenge and I included it,  thinking it was a holiday themed book. I guess I was just fooled by the snow and red on the cover. Important parts of the book are set in winter, but it’s not set during the holidays. So, I took off the challenge list. But I’ve read it now. 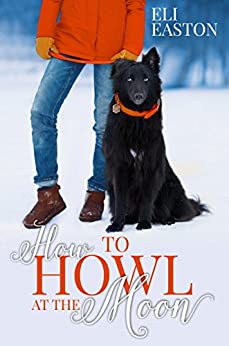 Sheriff Lance Beaufort is not going to let trouble into his town, no sir. Tucked away in the California mountains, Mad Creek has secrets to keep, like the fact that half the town consists of ‘quickened’—dogs who have gained the ability to become human. Descended on both sides from Border Collies, Lance is as alert a guardian as they come.

Tim Weston is looking for a safe haven. After learning that his boss patented all of Tim’s work on vegetable hybrids in his own name, Tim quit his old job. A client offers him use of her cabin in Mad Creek, and Tim sees a chance for a new start. But the shy gardener has a way of fumbling and sounding like a liar around strangers, particularly gorgeous alpha men like Sheriff Beaufort.

Lance’s hackles are definitely raised by the lanky young stranger. He’s concerned about marijuana growers moving into Mad Creek, and he’s not satisfied with the boy’s story. Lance decides a bit of undercover work is called for. When Tim hits a beautiful black collie with his car and adopts the dog, its love at first sight for both Tim and Lance’s inner dog. Pretending to be a pet is about to get Sheriff Beaufort in very hot water.

I thought this was really cute and sweet. But I also think I was predisposed to enjoy it, considering it has a border collie in it as a main character. You see, I have a border collie/blue healer mix (Batou, the mostly white one) and an Australian shepherd/border collie mix (Motoko, the predominantly black one). 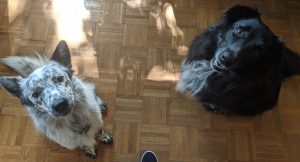 But I also enjoyed the quirky characters Easton populated the town with, Tim’s runaway mouth, and the easy way the book reads. I did think Tim tended a little too toward child-like naivete, especially when alone with Chance. But I look forward to continuing the series. 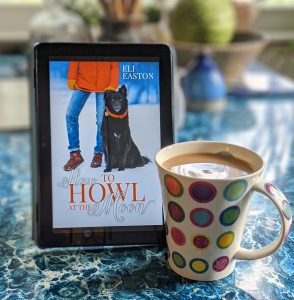 2 thoughts on “Book Review: How to Howl at the Moon, by Eli Easton”