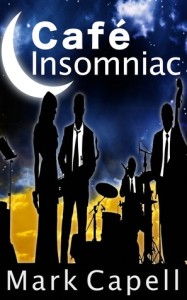 Author, Mark Capell sent me a copy of his novel, Café Insomniac.

Description from Amazon:
“The trick is not to fear the shadows but to embrace them… Night-time has become a good friend,” says Justin.But for how long?Twenty-five-year-old insomniac Justin Brooks opens an all-night café for something to do, to fill the long nights. But soon after opening, one of his customers is found murdered in a side street.What Justin doesn’t know is that his insomnia is connected to the murder.Even before the murder, inexplicable things were starting to happen in Justin’s life. But after it, life becomes very strange indeed……..His eyes stream when it rains outside….. Another café appears, out of the fog, out of nowhere….. Footsteps follow him everywhere….. The dead person talks to him, though it’s not a ghost….. And a magician waits for him, perched on a high wire, high up in the night sky…..Strange things indeed. But these strange things can’t possibly have anything to do with the murder. Can they?Nobody who visits Café Insomniac can ever look at the world in the same way again.“I don’t know what’s real and what isn’t — and which is most dangerous.”

Review:
In some ways this is a really interesting novel. It’s certainly well written. Mr. Capell sure knows how to string a sentence together for the most emotional impact. It’s also well edited. And since you spend a decent amount of time in Justin’s head (befuddled as it may be) you get a feel for him. There is a lot of such praise I could give the book.

Unfortunately, I also thought it dragged. Now, some of this is, I’m sure, purposeful on the author’s part. Justin’s sleep deprived mind moves at the speed of molasses. The slow pace of the novel echoes this, creating a certain appropriate atmosphere. But it also made the book feel much longer than it actually is. (And at 360+ pages, it’s already pretty long.)

What’s more, despite all Justin’s hallucinatory, confused ideas creating unexpected twists to the plot, the whole thing was disappointingly predictable in the end. If felt very much like the author wimped out a little bit and veered back onto safer ground before his conclusion.

I was also left with a few questions, though most of it did wrap up nicely. For example (and I’m trying valiantly to not include a spoiler here), was he ever really beat up? One would presume so since he really did know his sister’s problem, which infers he really did go to the hospital. If he was really beat up, who did it if XXX was a hallucination? Or what caused the injury to his hand at the end, if the events of the previous night weren’t real? Essentially, the book isn’t always careful to ensure that the effects of things explained away are also explained.

For the most part, however, it’s an interesting and enjoyable read. Well worth picking up if the blurb sounds interesting to you.