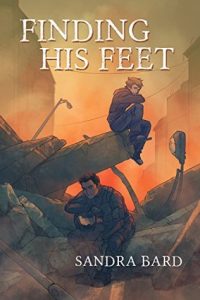 I borrowed Sandra Bard‘s Finding His Feet from Hoopla, through my local library.

Description from Goodreads:
Kaden Pace, a soldier injured while on a mission, hides the extent of his damage by wearing his high-tech armor, desperate to prove his worth to his administrators and make himself useful in order to hold on to his independence. But during a simple assignment to escort two cadets across the country to retrieve the armor of a dead warrior, things start to fall apart.

They meet Shun, a young man with a secret, who steals the armor they were supposed to recover. Chasing Shun brings them to an abandoned town, where they encounter even more trouble. Stranded in the deserted city, Kaden finds himself relying more and more on Shun, the person he’d come to capture, while fighting off an invasion from the neighboring country.

But even when he returns to camp, Kaden’s problems are not over. Now he has to find a way to save Shun, whom he’s growing to care for, and keep his team alive as they make one last-ditch attempt to get back the armor Shun stole. Armor that is now in enemy hands, on an island in the middle of the sea, at Ground Zero where it all began.

Review:
That was, oh man, you guys…I just didn’t think it was very good. It’s got a cool cover and the writing itself flowed fine (save a few telling-heavy passages), but there was just nothing about the story I found believable. An endless war that never really materialized. 15-year-old soldiers being sent out on missions. Soldiers who were unprofessional at every turn. Distrusted civilians being included in missions. Confidential information shared left, right and centre. A ‘romance’ that came out of nowhere. A totally predictable ‘twist’ at the end that was wholly unsupported. Questionable treatment and attitude towards amputees and disabilities. The male partner of the main character being presented as fulfilling the traditional wifely position. Hand-wavey science. A cliched happy ending. It wasn’t a bad book. But it sure didn’t work for me.