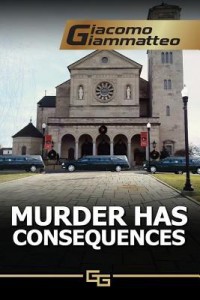 Giacomo Giammatteo sent me a copy of Murder has Consequences, book two of the Friendship & Honour series and sequel to Murder Takes Time, which I reviewed last year. I also noticed that there is a Goodreads giveaway running at the moment to win a copy.

Description from Goodreads:
It’s easy to give your life for someone you love. It’s much harder to kill for them. Nicky Fusco For a select few people, friendship lasts forever. Nicky Fusco and Frankie Donovan were friends like that, but that was years ago. Now Frankie’s a detective in Brooklyn’s Homicide department, and Nicky is a reformed hit man. But when Frankie gets in trouble–and the law can’t help him–he turns to Nicky. The problem is that Nicky promised his family, and God, that he’d go straight.

Review:
Warning: I’m about to do some gushing. I simply adore Nicky ‘The Rat’ Fusco and his family, Frankie ‘Bugs’ Donavon and his cop partners, and Giacomo Giammatteo’s writing. I just do.

Nicky is such a complex character. On the surface he comes across as a little simple, but he’s really quite sharp. He tries to pass himself off as no threat, but he’s actually one badass mother f_cker. On one hand he seems a little naive about his reputation (and in general), but he’s actually more than aware of it and wiling to use it to his advantage. He’s not afraid of anyone…anyone but his wife. He’d do just about anything to stay on her sweet side. He’s a straight up cold killer, but also a dedicated Catholic and amazingly sweet in his own way. He’s willing to go to great lengths to commit acts of heroism, (despite being a remorseless killer/torturer) but is also completely unwilling to seek any accolades for them—denying them even. He thoughtlessly uses outdated and even derogatory racial terms (Mick, Dago, etc), but doesn’t seem to actually be a racist. He happily befriends people that the territorial disputes say he should avoid. He’s a walking contradiction and I’m a little in love with him.

You don’t get to know Frankie quite as well, since you only get a 3rd person POV for him, but he has more than a few contradictions of his own. He’s a good New York homicide detective who grew up among The Connected of Little Italy and still has more than a few lasting connections. This causes him more than one moral conflict. Frankie grows the most in this book though and he provides some of the most human emotions.

Giammatteo’s writing is worthy of about as much praise as I could throw at it. It’s smooth and unhurried. He seems to be a master of creating atmosphere and emotions with very little. The way Nicky’s narrative always includes what streets he takes to get somewhere (seemingly pointless information) gives a very clear indication of how important the city and his connection to it is to him. His frequent side notes of what Angela made for dinner is a strong reminder of how the familiar dishes stir his most pleasant memories, further reinforcing the importance of his connection to the town and people in it. But my absolute favourite is all the small ways he reminds himself how much he loves his wife and why. She is his light, his anchor, and seeing a man who is otherwise quite cold willing to openly express his affection is really evocative.

I was a little disappointed that the antagonist was, among others things, a sexual predator. The subject matter was as tastefully handled as such things can be, but the older I get the more aware I become of how often such themes show up in fiction and the less forgiving of it I become. But this is a personal preference kind of remark and one of very few complaints about the book.

I wouldn’t say it was necessary to have read the first book, but it would probably help. Events from Murder Takes Time are referenced and some of the character descriptions are pretty light, since you’re expected to know who these people are and how they relate to one another. Both books are well worth reading though.

I have much the same thought every time I finish one of Giammatteo’s books. (Well,thoughts if you count how perfect I think his name is for someone writing fiction based in and around Little Italy. I hope it’s real, but I don’t know.) Reading the Friendship and Honour series makes me regret giving some other books five stars. It’s just on such a higher plain of awesomeness.

The afterward says that there will be a third on out next year. Given the ending of this one I have a pretty good guess what it will be about, plus I suspect it’s going to tie in with A Bullet for Carlos. I can’t wait! I really just can’t wait.