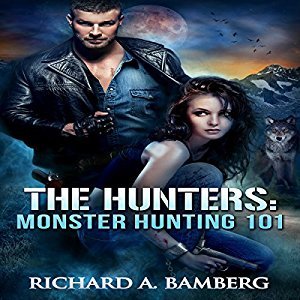 I won an Audible copy of Monster Hunting 101, by Richard A. Bamberg through LibraryThing.

Description from Goodreads:
When Jesse’s old girlfriend calls him requesting an immediate meeting late at night, he thinks of a lot of reasons she might have called. None of them are anywhere near the truth. Instead of a late night booty call, Gail brings him into a world he didn’t know existed, ghouls, werewolves, and ghosts and they all seem to be after Jesse’s blood. Gail wants Jesse to put a silver bullet in her heart to keep her from becoming the monster she hunts, but there’s no way Jesse is going to kill the girl he once loved. He convinces her to let him restrain her for the full moon. Luckily, a local Adult Intimacies store has all the bondage gear he needs.

Now he just has to fight off a pack of werewolves single-handedly while keeping her from ripping his own throat out.

Sex, guns, and werewolves, what could go wrong?

Review:
This unintentionally turned into a bit of a feminist critique of the book. I guess I can’t help but see things through that lens.

Listening to this was an interesting experience. Paranormal Romance is generally considered a genre geared toward women. It does after all have the word romance in it. But Monster Hunting 101 is most definitely a PNR for men. As such, I suspect many would avoid calling it PNR at all, insisting instead on Urban Fantasy or Military Fantasy (the hero is a veteran). But let’s not quibble, it has werewolves and a strong romantic subplot. It is Paranormal Romance, plain and simple. It’s just written such that the male character is the focus, instead of the female one, as would normally be the case.

That’s not to say that, as a woman, I didn’t enjoy it. I did. But books written by and for different audiences have a different focus, different centre of attention, different tone sometimes. And MH101 has the male gaze of its protagonist, not to mention his brand of humor, and he is the moving force of the plot, while the female fades into the background. This makes it stand apart from a lot of PNR books. I enjoyed it, but it was a different experience than many will be used to and it has different strengths and weaknesses.

I liked Jesse very much. He was an admirable hero and he was funny in the face of danger, as was Gail. But I very much felt she was just there to give him someone to bounce banter off of. The world of Hunters looks to be an interesting one and I can see this series going on for a while. It has lots of potential.

On the other hand, I thought the ridiculous amount of time dedicated to the choosing and applying of bondage gear was there for little more than titillation, especially since Gail so often had to be near naked in these scenes.

Plus, I got seriously sick of him subtly propositioning her for sex. I totally understand this was how the two of them flirted and she was not feeling offended or pressured at all. The (male) author made sure to write it that way. But as a female reader, I was annoyed by it. It was ceaseless and slapped of coercion. This joking, lighthearted, nothing wrong with any individual comment (most compliments), when taken together is constant pressure. In real life, it’s one of the ways “nice guys” coerce reluctant women to sleep with them. For the target of such a man’s attention, it’s sometimes easier to just give in and get it over with, even if you don’t really want it, than put up with the continued onslaught, especially if it’s a situation in which you are stuck. So, seeing Jesse do this eventually became nails on a chalkboard for me and I suspect it’s one of the many real world ways some men’s view of their own behavior and some women’s view of the same actions differ. Maybe others won’t read it this way, certainly the author didn’t intend it to be, but that’s where I was at the end of it.

I was also slightly annoyed that the strong, capable Gail called Jesse with a problem and then handed all control and decision-making power over to him. I mean, the D/s bondage gear as a solution was a fairly literal example of this. But ideally, who leaves the least knowledgable and experienced member of a crew in charge? But then, it too often seems natural for it to be the man, regardless of how skilled the women involved are. Don’t we see that everyday? Don’t get me wrong, Gail was never a push over and I loved that about her and Jesse respected and appreciated her strong personality. I very much liked that about him. But the book still made Jesse the most frequent decision-maker. He was the leader. In fact, I suspect the ending left him able to physically control certain aspects of Gail’s werewolf nature. Making him literally in control of her body.

Lastly, while the writing is pretty good, outside of a few examples of the same word being used several times in close succession and sounding repetitive, the plotting has far too many coincidences in it to be believed. I could not suspend my disbelief far enough to roll with some of the happenstance in this book. Ryan Jeanmaire also did an admirable job with the narration, but I did find it a bit flat.

All in all, I had some issues with the book, but I mostly enjoyed it and would be willing to read a second one.