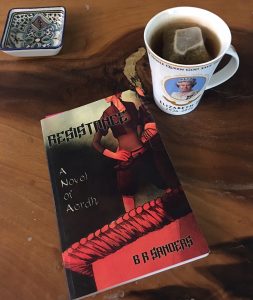 I bought a copy of B. R. Sanders‘ Resistance.

Description from Goodreads:
Resistance has many faces, and one of them is Shandolin’s. When she finds her friend brutally murdered, Shandolin decides to fight instead of run–but her only hope of survival is a takeover of the City government. Shandolin draws everyone she loves into the fray with her: her assassin lover, Rivna; her mentor, Moshel; and her best friend, Kel. Apart, they are weak, but together Shandolin and her friends, lovers and fellows may be just strong enough to save their skins and the skins of the other elves in the City.

Review:
Another winner from Sanders. The world-building here is fabulous. Though I’ve read several stories in this world, I think you get a pretty good idea of its complexity here in condensed form.

The main character Shandolin (Doe) is likable as are the side characters. But what’s really great is that you get diversity in the cast, both in the racial divisions of the elves, Qin, satyrs, humans, etc (though not all of them play a big part in this book), but also in sexuality, gender orientation, body types, and relationship styles. And all of it is just part of who they are, no need to make it the conflict on which the story hinges.

The infant social revolt that the story does hinge on is sketched out fairly faintly. Much of it depends on connections Doe made before the beginning of the story. But there is certainly enough to follow and believe it. I did feel the end was a bit rushed. Though I liked the ending just fine, it did seem to come about quite easily.

As an aside, and I’m really not sure as it’s been over a year since I read Ariah, but I think some of these might be side characters from the middle of that book. I’m not sure, as I said, but they all felt so familiar but I’m not certain on the names. Can anyone give me a yes or no on that idea? I see another review that said this is a whole new cast. So, now I’m doubting myself.

What I’m drinking: I swear I have been sick more times this year than in entire decades combined. I seem to have caught another cold. So, I’m supping on a some Celestial Seasons Honey Vanilla Chamomile tea. (And I’m sure there is some sort of irony in doing it out of a cup with the queen of a notorious empire-building nation on the front while reading a book about trying to overthrow the outsider government. But that was wholly accidental.)