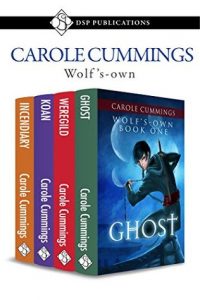 Description from Goodreads:
Read Wolf’s-own: the four-book fantasy epic featuring Fen Jacin-rei—Incendiary, Catalyst, Once-Untouchable—and Kamen Malick, who is determined to decode the intrigue that surrounds him. Fen’s mind is host to the spirits of long-dead magicians, and Fen’s fate should be one of madness and ignoble death. So how is it Fen lives, carrying out shadowy vengeance for his subjugated people and protecting the family he loves? With a threat all too close and a secret he needs to explain, Malick is at odds with those who should be his allies, and no matter how much he wants to protect Fen, it may be more than he can manage when he’s trying to keep them alive

Review:
I’m not going to write individual reviews for each of these books, because though I understand they are split up to avoid a 900 page epic and each does come to a relatively natural stopping point, it is undeniably one single story and any individual book would be most unsatisfactory on its own. So, they are not stand-alones! But since I read them as a bundle I’ll rate/review them as one. Even as I acknowledge that if I’d only had the first, I likely wouldn’t rate it so high, considering its lack of conclusion.

But as a single story I really enjoyed it. It’s tragic and complex and redemptive all at the same time. I loved Fen and Kamen, as well as Kamen’s whole team and Fen’s family. The world is complex and multi-demential and the peoples are varied.

I did occasionally, especially in climactic scenes, wonder how things that happened happened. I often knew what was happening, but felt I missed the explanation of how it was happening. How someone suddenly had control of another or caused a certain something to occur, etc. Similarly, sometimes things that were meant to be cryptic to the characters were also a little too cryptic to the reader. But all in all I loved it.