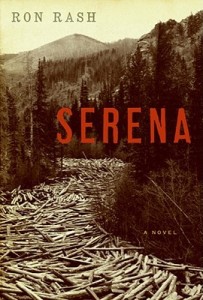 I’m kind of excited to have joined a book club, as in a real life, in person, book club. woo-hoo. Serena, by Ron Rash, was the book they chose this month. I picked a copy up from the library.

Description from Goodreads:
The year is 1929, and newlyweds George and Serena Pemberton travel from Boston to the North Carolina mountains where they plan to create a timber empire. Although George has already lived in the camp long enough to father an illegitimate child, Serena is new to the mountains—but she soon shows herself to be the equal of any man, overseeing crews, hunting rattle-snakes, even saving her husband’s life in the wilderness. Together this lord and lady of the woodlands ruthlessly kill or vanquish all who fall out of favor. Yet when Serena learns that she will never bear a child, she sets out to murder the son George fathered without her. Mother and child begin a struggle for their lives, and when Serena suspects George is protecting his illegitimate family, the Pembertons’ intense, passionate marriage starts to unravel as the story moves toward its shocking reckoning.

Review:
Can I just say how happy I am to be done with this book? I think it took me forever and a day to read it. It’s not that it’s a particularly bad book, but it was not to my tastes and frankly I was bored for most of it. The events alluded to in the synopsis don’t really happen until the last quarter of the book and the child and his mother play a very small role in it. The rest is largely the day-to-day happenings of the logging camp.

I enjoyed the loggers’ uneducated observations about their bosses, but was less enamored with those bosses themselves. They were such intensely dislikable people (as they were meant to be). He was simply a snobbish product of his time. She, however, was a homicidal psychopath.

All in all, probably a fine read for someone more inclined to enjoy the genre. I read it because my book club chose it this month. It’s unlikely I would have picked it up otherwise.