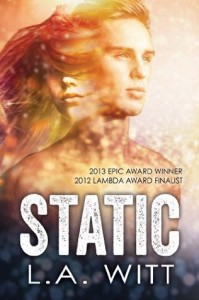 I downloaded a copy of L. A. Witt’s Static from Netgalley.

Description from Goodreads:
After two years together, Alex has been dreading the inevitable moment when Damon learns the truth: that Alex is a shifter, part of a small percentage of the population able to switch genders at will. Thanks to a forced implant, though, Alex is suddenly static—unable to shift—and male. Overnight, he’s out to a world that neither understands nor tolerates shifters . . . and to his heterosexual boyfriend. Damon is stunned to discover his girlfriend is a shifter, and scared to death of the dangers the implant poses to Alex’s health. He refuses to abandon Alex, but what about their relationship? Damon is straight, and with the implant both costly and dangerous to remove, Alex is stuck as a man. Stripped of half his identity and facing serious physical and social ramifications, Alex needs Damon more than ever, but he doesn’t see how they can get through this. Especially if he’s static forever.

Review:
Before I even get into this review I might as well admit that Guinevere Thomas has already written the review I want to. So, you might as well start with hers.

I want it noted here, in the beginning of my review, that Static has a noble goal. It’s essentially an apologue, using the fictional ability to shift ones gender as an allegory for non-heteronormative gender and sexual identities. Witt, no doubt, thought to place her characters in sympathetic positions that allow for lessons in tolerance and acceptance. I can 100% get behind this intent. I applaud the attempt.

HOWEVER, it’s a failure. It overshoots it mark by such a degree as to move into arrogant denials of identity in another way. Instead of claiming anyone who doesn’t ascribe to basic hertonormative ideal are problematic by virtue of their non-‘normalness’ (a ridiculous accusation we see all the time in RL), it essentially claims that the only way we can all live happily is to expect no static gender or sexual identity at all, which is just as insulting. This book doesn’t promote gender/sexual acceptance, it’s advocating gender/sexual identity nullification, which robs people of their right to self-identify as surely as forcing them to be pretend to be something they’re not.

But that’s not the only reason why I found the book insulting to the very community it would appear to have been written to support. Its subtexts also made some disturbing correlation. For example, the main character claims to be gay.  He was born male, but can shift to female and spends most of his time as such (though throughout the course of the book he’s male) and he’s attracted to men. However, he also claims to have urges as both a male and a female that he would like to see satisfied.

This both separates his/her gender from his/her sexual orientation, which drastically simplifies a dynamic, interrelated, complex issue but also essentially equates being gay with being a woman, thereby denying him his masculinity. I find that problematic. And that’s without even getting into the dismissive way actual transgenders are dealt with or the fact that he only seemed to relate to his female form anyway.

I’m all for ‘do and be anything you want and to hell with the titles,’ but this really seems like it’s stretching a bit. It felt like it the book sought to purposefully removed the need for all gender/sexual identifiers and then chastise those who are still so gauche as to look for at least enough cues to drop the right pronoun at the right time. Because, of course, true acceptance wouldn’t care what gender a person was or who they were attracted to, which is again, a nice ideal.

This doesn’t come across as realistic, though. Both because gender/sexual identity expectations aren’t wholly socially separable and because the book isn’t about three genders (female, male, and genderless). It’s about being able to shift between being wholly or partially male OR female. Which means, despite the way the book reads, the author probably didn’t set out to separate gender and sexuality in her world, instead she’s just preaching that the expectation of gender or sexual identifiers is a form of bigotry. And there is very little I find scarier than an author who’s written a work that makes grand sweeping social judgements BY ACCIDENT.

Sorry, being able to recognise something as existing or existing in a certain state isn’t the same thing as forming a derogatory judgement of it. But in its attempt to highlight complete acceptance of all forms of gender identification and sexual orientations (which, again, is a wonderful thing to do) the book just created an arrogant, characteristicless hodgepodge of humanity.  This, if you think on it, kind of robs those same individuals of their right to bask in their own individualisms.

And all of that is just my main complaint. I have any number of smaller ones. Top of the list is the fact that this intention to teach the reader that queer/transgendered/homosexual/etc peoples are really just like anyone else and *this* is what true tolerance and acceptance looks like (again, a laudable goal) was utilised like a mallet to the brain. The reader is battered with it from the first page to the last. It’s an obvious ulterior motive that almost wholly eclipses the story trying to be told. And while I appreciate the message, I resent finding propaganda disguised as entertainment (even when I agree with it). Not to mention it was incredibly condescending and as a reader, I was insulted.

Other than its heavy-handed moralistic repetitive message, the writing was pretty good. I had no real problem with it. It’s mechanically fine.

However, I found the whole thing redundant. 90% of the book is literally three themes over and over again: Alex and Damon worrying, but not talking about how to deal with their relationship. Alex or Damon talking to other people about the social circumstances of shifters and statics (the ‘how to be tolerant’ spiel) and Alex whinging in self-absorbed mental agony.

I also felt no chemistry between Damon and Alex. We’re told they have it but you don’t see it. This is especially problematic since it’s this chemistry that’s supposed to be instrumental in getting Damon to accept a man as a lover when he’s staunchly heterosexual. I didn’t feel it. Nor did their past relationship fill the void. It seemed to be predominantly based on one happy episode and two years of Damon worrying about Alex. Where am I supposed to find love in that? It felt very hollow. Not to mention Damon was more understanding and introspective than any RL man would ever be. He’s just too much of a perfect Prince Charming to be believable.

In the end, I’m gonna have to wash my hands of this one. I respect what Witt was trying to do in this book. And while I’m a straight, white, western woman who inhabits a position of relative social privilege and can’t claim firsthand knowledge of the issues being addressed in this book, I can suggest that any future author interested in following Witt’s footsteps put a little more thought into what the overarching message he or she is projecting with her or his characters. Because I strongly suspect (and it’s only a suspicion, I don’t know Witt) the author didn’t mean to make some of the important social claims being made in this book. And that’s a terrifying thought.