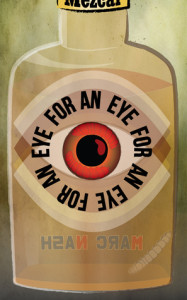 Description from Goodreads:
You can tell a lot about a society from its murders. And Simon Moralee can tell everything from its victims. He has the gift- or is it a curse?- of being able to recover a vision of the last thing murder victims had imprinted on their minds before death. It means he can identify their killers and describe them to the police to secure a one hundred percent clean-up rate. A gift he first discovered as a teenager when cradling his butchered mother in his arms.His financially bankrupt society leaps at the opportunity his gift provides, by cutting the level of policing and detection back to the bone, as a yet another cost-saving measure. The few remaining policemen serve as Simon’s minders as they seek to protect their most valuable asset and the one remaining celebrity the State can promote to their citizens as a good news story. Only people are losing interest in his exploits, as they lose hope for their society with its murder rate spiralling beyond Simon’s ability to keep pace. And into this numbers game emerges a new threat, when a criminal mastermind with a psychic power of his own, challenges Simon in a psychological joust to the death…

Review:
You know how people sometimes gripe that there are rarely any surprises at the end of books, as the good guys are guaranteed to win one way or another? “Why can’t the baddy win every now and again?” They might ask. Well, here is the book for them. It’s not strictly that a person on the evil side of the protagonist/antagonist divide wins, so much as a delicious twist on winning at all. Look for no happily ever afters here.

To be sure this is a dense read though. I generally enjoy the occasional ten dollar word, but they are the norm rather than the endearing exception here, making the book feel like an obscure work by some long dead classicist Russian or, gawd forbid, Italian. Obtuse. I spent a lot of time rereading overly wordy, syllable heavy passages of ethereal prose. It wasn’t quite purple, but it held that same uselessly accessorised feel to it. In the end, it just felt pretentious and pompous, as if Nash was puffing it up for ego’s sake.

Now, don’t get me wholly wrong. The style annoyed the ever-living crap out of me, but it was smart writing. The vocabulary was definitely well above the average, the ideas being imparted were thoroughly thought out and it was all mechanically and editorially without fault. (Or at least I noticed very few errors.) So, pending you can get past the self-important writing style, a good story awaits.

I did have trouble with the disassociated detached observer narrator. To me all of the narrative about the social situations and such felt like it should be coming from Simon, which meant anytime that that same narrative then turned its external eye on him, referring to him in the 3rd person, I was jarred. It just felt wrong to me.

I also found it inconsistent. Sometimes functioning as an omnipotent observer, other-times being denied knowledge of people’s thoughts or motives. Again, I found these moments pulled me from the story.

Final say? A really interesting dystopian setting (I might even call it post apocalyptic, if you’re willing to credit economic collapse with ending civilisation.), thought provoking characters and a appropriately gritty noir mystery of sorts, but not really. All presented in a painfully flouncy package, making it a so-so read but good thought experiment.