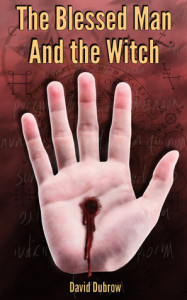 Author, David Dubrow sent me a copy of his novel, The Blessed Man and the Witch.

Description from Goodreads:
Foretold by the visions of agony-stricken psychics, the end of the world is near. While Heaven and Hell battle for holy relics to be used as weapons of war, fallen angels imprisoned by God Himself seek release. The Time of Miracles has returned. Armageddon is coming, and the victor is yet unknown.

Combining themes of Biblical apocalypse, western occultism, and supernatural horror, this is a gripping story about survival, intrigue, and redemption.

Review:
I’ve had this on my kindle for a while now and, honestly, when I opened it to read I thought it was another book. [That’ll teach me to not reread synopsises.] It’s a lucky break too, because between the truly unappealing (to me) cover and my fear that it would turn out to be a soul-sucking religious book (as opposed to simply using Biblical material) I probably wouldn’t have read this one, or at least no time soon.

For the record, I would classify this as Christian Fiction (though I’m not sure the author would), but not the preachy, whitewashed type that makes me hate the genre in general. You know, the type where no one curses or has sex or does anything they’d be ashamed to tell their pastor about and characters are always harping on about the boundlessness of God’s love. As if saying it just one more time will make you, the pitiable lost soul, finally see the heavenly light. To borrow my mother’s phrase, the type that makes proselytising an imposition instead of an invitation.

The characters here are gritty and real. The drama is dirty and you’re never entirely sure which side is ‘right.’ Kyle gets little preachy, but to be fair, it’d be hard to write an evangelical conversion without at least a few references to the glory of the Kingdom of Heaven and such. But he’s the only one. I thought the other characters did a good job portraying an array of believable human responses to a Biblical Armageddon and the author did a great job of tying a believable Armageddon scenario into modern events.

So, despite my basic dislike of the Christian Fiction genre, I enjoyed this book and think other non-Christians could too (as, of course would the intended audience). It presents a lot of interesting questions, is surprisingly relevant to modern times and has some great characters. Ozzie was my favourite. He wasn’t a good guy, he wasn’t even a nice guy. But I found him oddly compelling.

So, if you’ve any interest in books about End Times, I’d recommend picking this one up. It’s a smart read, leading the reader to ideas without pummelling them by overstating the obvious. I always appreciate that. The writing is also superb, the dialogue believable, the story interesting, and the editing well done. Well worth reading.