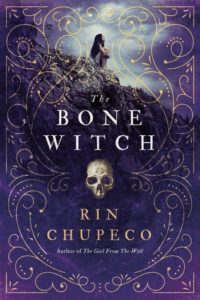 I received a copy of The Bone Witch, by Rin Chupeco, from Netgalley.

Description from Goodreads:
Let me be clear: I never intended to raise my brother from his grave, though he may claim otherwise. If there’s anything I’ve learned from him in the years since, it’s that the dead hide truths as well as the living.

When Tea accidentally resurrects her brother from the dead, she learns she is different from the other witches in her family. Her gift for necromancy means that she’s a bone witch, a title that makes her feared and ostracized by her community. But Tea finds solace and guidance with an older, wiser bone witch, who takes Tea and her brother to another land for training.

In her new home, Tea puts all her energy into becoming an asha-one who can wield elemental magic. But dark forces are approaching quickly, and in the face of danger, Tea will have to overcome her obstacles…and make a powerful choice.

Review:
How can you be disappointed in a book that is beautifully written? I don’t really know, but I’ve managed it with The Bone Witch. Honestly, the writing and world-building is superb, but there my praise pretty much ends.

This book is 400+ pages long and the only action in the whole darned book occurs at the very beginning when the brother is raised from the dead and at 90%. That’s it. The whole rest of the book is Tea (pronounced as Tey-uh, as we annoyingly discover 67%) learning to be a geisha. Yes, she’s an all powerful bone witch. The only new one in decades, the one desperately needed, as the deava (undead beasts that rampage and kill people) keep popping up and, well killing people and she’s the only one who can do anything about them. But does she? No. In fact, when she asks to, she’s told to not waste time “with any more of these foolish wildgoose chases.” Instead, she learns to sing and dance and make pleasant conversation with her (apparently all) male cliental. That’s right, she’s basically just there for the entertainment of men, as are all asha.

There are things I appreciate about the book. There is some diversity in skin tone and culture. Some gender norms are purposefully challenged, though FAR MORE are passively reinforced. Again, the writing is beautiful. The reveal at the end piqued my curiosity, but I kind of saw it coming. It’s enough to interested me in the next book. But I spent a lot of this one being frustrated with the lack of pace and betrayal of a promise of a strong female lead. She’s stubborn and she is powerful, but I thought that every surrounding detail of the book—from the fashion to the families, to the political structure—undermined female autonomy and strength and reaffirmed women’s (or girls’) secondary position, even when possession an overwhelming ability. Which is not uncommon is fantasy, but I felt I’d been promised something different here. What’s more, I kind of sense the author thought she did write something different.

Case and point, an official graphic: 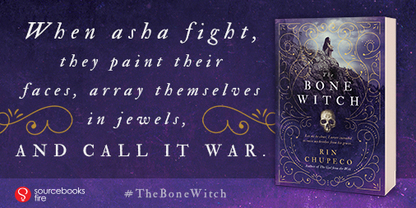