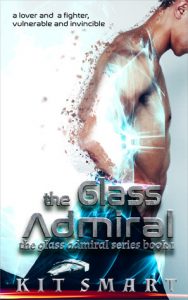 Description:
Cavalry officer and master horse trainer Lt. Megarheri Saverna, doesn’t have much use for males of the two legged variety beyond an occasional one night stand. She is, therefore, less than pleased to be dragged off-planet, away from her horses and assigned as batwoman to Space Fleet’s most notoriously difficult hero. Even if he’s gorgeous, witty, unexpected and quite possibly the sexiest man in the universe.

Admiral Sen Kosuri has never seen himself as anything other than what he is; a severely disabled, half Recessive fleet officer; an admiral in name only. Relegated to a desk since the mutiny that left him disabled, he never thought he’d see a field command again and now that he has, he is determined to keep it even if it means making use of his reluctant ‘batwoman’ for however long she lasts.

Tough, funny, beautiful and more than able to handle anything he throws at her, Lt. Saverna is a revelation; one that soon sparks a sexual attraction that triggers his Recessive mating impulses and has him seeing beyond what he is to what he could be and hoping that she might last forever.

Warning: The Glass Admiral is a sci-fi romance featuring a disabled hero and strong female lead that contains sexual situations and several graphic descriptions of intimacy. Intended for mature readers.

The editing is a mess. (At one point I passed a paragraph I thought might actually be a left over plotting note. The paragraph didn’t fit where it was and didn’t make any sense to the story.) And information is dropped willy-nilly. For example, toward the end she states she wants to claim him because she’s a dragon and I stopped and went, “Wait, does she mean that literally or is that, like, her unit in the Calvary?” The book has no ending. Of course it ends, and I knew it wasn’t stand-alone, but nothing wraps up, there’s no build-up to anything, there’s nothing to mark a logical break between books. It literally just ends out of nowhere. It’s too precipitous to even be called a cliffhanger.

All of it added up to a mess…but a mess that you could see good bones in. Given to a competent content and developmental editor this could be good. But it’s not there yet. And none of this touches on my biggest problem. I chose to read this book because I thought it might be a fun read, but also because it had a lot of elements you don’t often see. She was the more experienced sexual partner and that alpha-type male was disabled, living with chronic pain and injury. Plus, given the cover, I assumed he would be black. (And though the word isn’t used, by his description his was.) But then, as the only notably black character, he’s referred to as a Recessive (whatever that is, his race I think) and was subject to a very public sexual maturation in which he apparently had a prolonged raging hard-on he couldn’t control among other things, which was followed by years of doctors taking liberties with his body and a loss of autonomy. I was very, very uncomfortable with the implications.