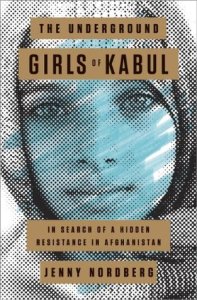 I received a copy of Jenny Nordberg‘s The Underground Girls of Kabul from Netgalley.

Description from Goodreads:
An investigative journalist uncovers a hidden Afghan custom that will change your understanding of what it means to grow up as a girl.

Expanding on her widely read New York Times article “Afghan Boys Are Prized, So Girls Live the Part,” in which she uncovered the phenomenon of bacha posh (literally “dressed up like a boy” in Dari), the practice of disguising and raising young girls as boys, Jenny Nordberg constructs a powerful and moving account of the long-standing tradition that has enabled many girls to counter the challenges they face in a deeply segregated society where they have almost no rights.

Through extensive in-depth reporting and first-person interviews, Nordberg offers a fascinating, almost fairy-tale-like look at how girls can be willed into looking, behaving, and acting as boys, why mothers would ask that of their daughters, and what ultimately happens when some girls do not want to rescind the prerogatives that go along with living as boys, and later as men.

Divided into four parts, following strong characters through childhood, puberty, married life, and childbirth, The Underground Girls of Kabul charts the entire life cycle of Afghan women and gets to the heart of how bacha posh has profoundly affected generations, not only in the greater historical and political context of Afghanistan but also what it means to women everywhere now

Review:
I can read a 300 page novel in a day but it took me a really long time to read this book, I mean months. The reason is that I could only take it in small doses. It’s dry. It’s depressing and its content takes digesting.

I’m really interested in the lives of woman in Afghanistan (or any culture so far removed from my own). My first degree was in anthropology and the reason was that the way people live fascinates me. This isn’t the first time I’ve tried to get a handle on the Afghani culture and I’ll give this book credit for trying to be more well-rounded than most.

And I think Nordberg managed it up to about 40% through. Up to that point I was loving that she took a lot of time to place some of the practices that just make no sense by Western standards within a historical, political and religious context so that, while they still feel wrong, wrong, wrong, the reader is able to understand how the practice developed and at one point made some sort of sense.

And this was part of why I could only take small doses of the book. When I’ve read plainly inflammatory texts (some of which I can barely deem better than anti-Afghanistan war propaganda) it’s easy to dismiss a lot of the bad stuff as over exaggerated or tell yourself they just left the good stuff out. But when it’s presented as balanced and therefore believable it’s hard to face in bulk. And lets be clear, life in Afghanistan for women is horrendous.

The main problem I had was that this is presented as a piece of nonfiction, as research. And certainly, Nordberg did a lot of fieldwork, conducted a lot of interviews and observed a lot of Afghani daily life. But this is not a piece of straight research.

At best, I might call it a well structured, well padded field journal. This is the story of her experience conducting research into the Bascha Posh, as opposed to a presentation of the research results. And as such, it is heavily biased and opinionated.

This started becoming more evident at around the 40% mark, when the basha posh stopped being children and the book moved into marriage practices and transitions back into girls. In other words, when they start having personal volition that is subjugated.

As an example, there is a quite detailed chapter on marriage practices of non-basha posh girls. While basha posh are usually expected to marry, this is relevant, but the detail it goes into is clearly meant to be defamatory to the culture. Nordberg isn’t able to keep her judgment concealed.

Granted (and this is important), Nordberg is a lot more open-minded about the culture than most. But she still definitely presents a colored picture of the lives Afghani females live.

I went into this book hoping to finally find an author who would present a picture of Afghanistan, admittedly a very androcentric society, as something other than inhabited by nothing more than a bunch of power-hungry perverted old dudes perping on little girls and victims. I got more. I’ll admit that. But I also got a lot of the same old same old.

I also wasn’t entirely clear what the intent of the book was. As I said, it’s represented as straight research but isn’t, not really. It also repeatedly decries the usefulness and effectiveness of international aid in the region (which I actually agree with her on) but then ends on what essentially amounts to a general call to action. She spends the whole book presenting herself as vested in the culture and then leaves like everyone else. The end result was that the book feels anchorless and as a reader, I wasn’t sure what I was supposed to be taking away.

Similarly, the basha posh tradition, as presented, does not appear to actually be a form of resistance, as the title suggests. Rather, it is a way of functioning within an extremely paternalistic culture. But it’s important to note that everyone involved is still functioning under the belief that males are superior to female (socially at the very least).

It’s just that they see certain aspects of gender (though not sex) as fluid. With one possible exception, none of the basha posh interviewed or their families used the basha posh tradition as a form of social resistance. Instead they used it for personal gain within a system they were not seeking to reform.

The lack of male insight is also a glaring omission, especially since there is a whole section titled Men in which men are not interviewed. I understand that this is a book intended to center on females and, as a woman herself, Nordberg may have faced access challenges. But Afghanistan is a country controlled by men. The bosha pash are an open secret. It would have been informative to know how men—fathers, brothers, government officials, etc—saw the practice and felt about associated with theses ‘men.’ (Though it’s worth noting that despite their insistence that they are MEN, Nordberg refers to them as women throughout the book.)

Similarly, despite declaring that the foreigners who go to Afghanistan can’t ever really understand the culture, all of her ‘experts’ seem to be foreigners or Afghani women living outside of the accepted behavioural norms. I have to wonder how accurate her information, which she then presented as fact, was.

I had the same thought when events that occurred when she was not present were discussed confidently, while it was simultaneously evident that she only received the account from one of the participants. I would have been interested to know how, if at all, the narrative changed from the other person’s point of view. However, I sensed that, as a reader, I wasn’t supposed to care about anything but the slim perspective the author chose to present the events through.

Despite these complaints, I think I highlighted about half the text. There is still a lot to be gained by reading it. The book is garnering a lot of attention and I think it is deserved.