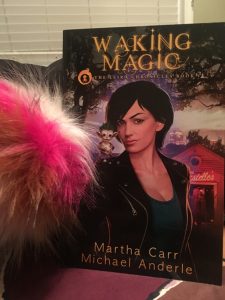 I won a copy of Waking Magic, by Martha Carr and Michael Anderle through Goodreads.

Description from Goodreads:
There are some on our planet who believe you can’t handle the truth, so the truth has been hidden for millennia. The only problem is the truth is coming back… Early.

Some of the crazy history shows on cable TV might not have the answers, but at least they ask the right questions.

Homicide detective, Leira Berens is in a race against a magical force with a mischievous troll by her side with a penchant for swearing.

The stakes are real. And so is the magical world she just visited.

An elven prince is dead, a timebomb as a necklace is loose in her world, and her mother may not be crazy.

It’s a lot. But with help from unexpected places, Leira is going to accomplish more than she ever thought possible.

Welcome to The Revelations of Oriceran.

Because some believe you can’t handle the truth.

Review:
I was bitterly disappointed by this. Let me start with a little bit of a rant. This is labeled as the first book in a series, book 1. But I picked it up and was completely confused, lost. The story had obviously started somewhere else. How can that be if this is book one, I asked.

Well, apparently there is a book .5. Now, I have no problem with .5 books (or however you want to labeled something that comes before book one). This is the place for a prequel. But if the story is part of book one, if it’s necessary to read and understand the story, then I firmly believe this is not a prequel, it’s not book .5. IT IS BOOK ONE. So, I take some serious issue in how this author has chosen to number the books. I couldn’t pick up book one and find the start of a story. I couldn’t easily catch up or follow it. This is a serious problem for me. Especially since it doesn’t really end either. So, I didn’t get a complete beginning or ending.

Outside of that (for me) one big issue, I also thought the book rushed and unfocused. Tell me, if you have a few short days to find someone and a magical object would you take the time to go bowling? As an author, would you dedicate pages to someone’s trip to CVS?

There was very little in the line of plot progression, character development or world building. (Maybe it’s all in that previous book, which only further supports my assertion that it should be book one.) I’ll grant that the characters were likable and the troll cute. But you never get to know them.

The writing is mechanically fine and I don’t remember too many editing errors. But I have no desire to continue the series.

Edit: Another reviewer, who did read the ‘prequel’ stated that it is the “the first 3 or so chapters of the book, despite being published separately.” I’ll add that it’s not even a freebie. So apparently you have to pay for the first 3 chapters of this book separately. That’s a big FAT “no” from me.

I won an Audible copy of Black Dog Blues from the narrator, Greg Tremblay and Queer Sci Fi. Because I enjoyed the first one, I borrowed an ecopy of the second (Mad Lizard Mambo) through Amazon. Thank you A. 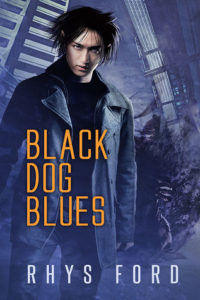 Description from Goodreads:
Ever since being part of the pot in a high-stakes poker game, elfin outcast Kai Gracen figures he used up his good karma when Dempsey, a human Stalker, won the hand and took him in. Following the violent merge of Earth and Underhill, the human and elfin races are left with a messy, monster-ridden world, and Stalkers are the only cavalry willing to ride to someone’s rescue when something shadowy appears.

It’s a hard life but one Kai likes—filled with bounty, a few friends, and most importantly, no other elfin around to remind him of his past. And killing monsters is easy. Especially since he’s one himself.

But when a sidhe lord named Ryder arrives in San Diego, Kai is conscripted to do a job for Ryder’s fledgling Dawn Court. It’s supposed to be a simple run up the coast during dragon-mating season to retrieve a pregnant human woman seeking sanctuary. Easy, quick, and best of all, profitable. But Kai ends up in the middle of a deadly bloodline feud he has no hope of escaping.

No one ever got rich being a Stalker. But then few of them got old either and it doesn’t look like Kai will be the exception.

Review:
I really quite enjoyed this. 8 hours and 50 minutes and I listed to it in one day. Seriously, I got all my laundry folded, cleaned my house, did a little knitting. It was great. I think what I liked most was Kai’s sarcasm and the rough, fatherly affections of the stalkers. I appreciated how the elfin and human societies sat side by side, chafing at the edges. As well as how Kai was bisexual and the slow, slow burn of the romance.

I was annoyed with how women were represented. There aren’t a lot of them and they’re all cliched. The untouchable angel, the whore, the sexually aggressive cousin, the raving bitch, the manipulator and the mother (who was also disloyal). There wasn’t a single non-problematic women in the book, when taken all together. Why does MM so often do this?

I also liked the narrations. I was a little iffy with the Irish lilt, given the appearance of the character on the cover and the obvious Japanese influence. It didn’t match what I would have imagined. But it worked, given his adoptive father and once I got used to it. 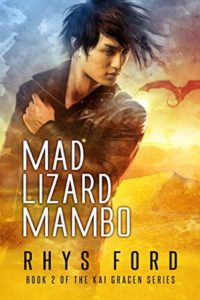 Description from Goodreads:
Kai Gracen has no intention of being anyone’s pawn. A pity Fate and SoCalGov have a different opinion on the matter.

Licensed Stalkers make their living hunting down monsters and dangerous criminals… and their lives are usually brief, brutal, and thankless. Despite being elfin and cursed with a nearly immortal lifespan, Kai didn’t expect to be any different. Then Ryder, the High Lord of the Southern Rise Court, arrived in San Diego, Kai’s not-so-mundane life went from mild mayhem to full-throttle chaos.

Now an official liaison between the growing Sidhe Court and the human populace, Kai is at Ryder’s beck and call for anything a High Lord might need a Stalker to do. Unfortunately for Kai, this means chasing down a flimsy rumor about an ancient lost Court somewhere in the Nevada desert—a court with powerful magics that might save Ryder—and Kai’s—people from becoming a bloody memory in their Merged world’s violent history.

The race for the elfin people’s salvation opens unwelcome windows into Kai’s murky past, and it could also slam the door on any future he might have with his own kind and Ryder.

Review:
I enjoyed this in much the same way I did the first. I still liked Kai’s sarcasm and his tough outer shell that guards a big, squishy heart. I still liked Ryder and the side characters. I liked where the story seems to be going and the mysteries that are being revealed about Kai.

I did think there were a lot of coincidental, none plot related things happen. Like getting caught in a sudden flash flood or a buffalo stampede. I kept waiting to find out there was a weather mage or something causing it, but that didn’t appear to be the case. Additionally, they were supposed to be going somewhere super dangerous, but they barely encountered any challenges.

Regardless, I hope the next comes out soon. I can’t wait to read it. 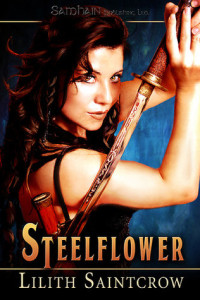 I borrowed a copy of Lilith Saintcrow‘s Steelflower from my local library.

Description from Goodreads:
Picking the wrong pocket can get a girl in trouble…

Thief, assassin, sellsword—Kaia Steelflower is famous. Well, mostly famous, and mostly for the wrong reasons. She’s made a good life for herself, despite being kicked out of her homeland for having no magic. She’s saving up for her retirement, when she can settle down, run an inn, and leave the excitement for others.

Then she picks the wrong pocket, wakes up with a hangover, and gets far more than she bargained for. Now she has a huge, furry barbarian to look after, a princeling from her homeland to fend off, and an old debt to fulfill. And for some reason, the God-Emperor’s assassins want to kill her.

It’s never easy being an elvish sellsword, and this time it just might be fatal…

Review:
I both really enjoyed and found myself quite frustrated with this book. I liked Kaia. I liked the Barbarian. I adored D’ri. I liked the world and the writing. BUT the book never really goes anywhere. They wander around and do this and then that and then something else, but there is no intent in it. Also, while I understood Kaia’s strong reluctance, I got tired of reading it. Worst of all, the hints that all the hardships she’d suffered in her life might have actually been her own fault, based on a misunderstanding that she didn’t seek clarification of over a decade is off-putting to say the least.

Despite all that, I’d read more if there was any, but Saintcrow states that she does not intent to continue the story, as e-piracy killed the series. Which means that this, an incomplete story (though not a cliffie), will always remain so and that makes it kind of a pointless read IMO.