I accepted a review copy of Dancing With the Devil, by Gayatri R./Gayatri Ramchandran. It was also featured over on Sadie’s Spotlight. 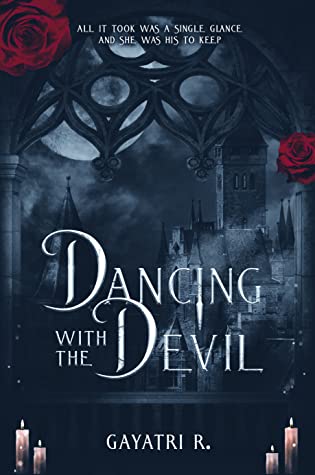 Corvo:
They didn’t call me “The Raven” for no reason.
I’m known for being ruthless, lethal, and dangerously magnetic. I’m a shadow, the monster pirouetting in the dark. I’m feared yet loved by all, and the entire city surrenders to my name as I rule them with an iron fist.
People always look both ways before crossing me.
Until Bianca Romano turned my life into a storm with just a single glance.
She became mine to keep.
My obsession.
My beautiful temptation.
I broke my rules for her, but that doesn’t mean she can control me.
She’s staying, and she wants to play my game.
But I’ll show her exactly who’s in control.

Bianca:
They call him “The Raven.”
Legend has it that if you look at him, there’s no going back. But I bent my rules for him, and now I’m his, with no way out.
Corvo De La Rossi isn’t the monster he claims to be.
Because I know underneath that brutal exterior lies a lot of pain.
If he’s the monster, the beast in this fairytale, then I’m the beauty who will put back the broken, lost pieces of him-the one who will tame him.

I am in a really, really awkward place reviewing this book. So, I’m just going to lay it on the table. I received an Advanced Reader Copy (ARC) of this book. And often ARCs come to reviewers before they’ve had their final editing pass. So, it’s not uncommon to find the occasional editing mishap. I’m used to that. We look over them. But Dancing With the Devil seemed to have come to me before it had any editing, despite releasing only days after I read it. The file I read was really quite rough. I would have DNFed it if I hadn’t been committed to the review.

I normally wouldn’t talk about this in a public review. It, of course, isn’t pertinent to those purchasing or reading the book after it’s had further editing. Presuming it does; we reviewers generally take it on faith that the books will get that additional, final pass. But I feel like I have to mention it here, because I’m not wholly able to disentangle how much of my dislike for the book was because of how unpleasant and uncomfortable it was to actually read and how much was not liking the actual story and writing style itself. Do you see my difficulty? I don’t think I can fairly review it without including this note on a possible conflict.

At the end of the day, I gave this a 1-star. I might have been willing to grant it an extra star if I had a 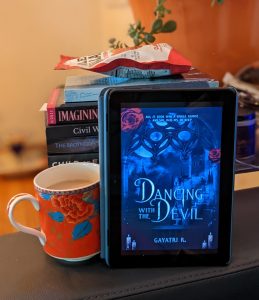 cleaner copy and knew some of the over-inflated dialogue was toned down and smoothed out. But I don’t think it ever would have been a real winner. Raven talks in catch-phrases, monologues like a super villain pretty much constantly. The plot judders along inconsistently. I was never even wholly able to decide if Raven’s demonic descriptions were meant to suggest he physically had a demonic form or was just poetic license, on the author’s part. (So, I literally don’t know if this is a paranormal or contemporary book AND I’VE FINISHED IT.)

All in all, the best I can maybe say for Gayatri R.’s Dancing With the Devil is that I finished it.

Dancing With the Devil

I received an Audible code for a copy of Deathless & Divided, by Bethany-Kris. It’s narrated by Roberto Scarlato.

Lies and love. This is how a war starts.

A life for a life. That’s the mafia way. Damian Rossi owes his life to a man who is ready to collect. That payment comes in the form of an arranged marriage to the daughter of another leading family in the Chicago Outfit. He’s ready to follow through, even if that means making sure Lily knows she’s his.

Lily DeLuca isn’t being given a choice. Forced home to marry a man she doesn’t know and back into a life she’d rather forget, her world is full of half-truths, buried pain, and uncertainty. But Damian is nothing like she expects. His motives aren’t clear. Her beliefs are being tested.

When it comes to this world, no man can be trusted. Someone is ready to flip the Chicago Outfit on its side all for the promise of something better. But no one runs a clean game and these men play for keeps. When blood begins to paint Chicago red, four families will be divided by loyalty, hatred, and revenge. There is no hiding. There is no safety.

No one is deathless.

This wasn’t bad, not what I expected going in, but not bad. I liked that Lily wasn’t a push-over and Damian was too charming for words. I really liked all the behind the scenes manipulation happening between the bosses, though I guessed who was behind it all from the beginning. The writing flows and Scarlato, the narrator, did a good job.

I did think Lily got over her resistance too quickly and then the two of them were instantly in love and willing to go to any lengths for one another. It was a little too much too quickly. But again, not bad.

I just had one big complaint (that has multiple facets). While it may be goshe to talk about sex, I’m going to…in some detail. My first big complaint came with the first sex scene. The whole premise of the book is that Lily has been called home to Chicago and her mafia family to be married off. She’s angry about this, feels like chattel, struggles against the whole idea. Damian—her intended—tries hard to convince her this isn’t the case. So, when in the very first sex scene he starts all the “tell me who this belongs to” (when talking about her pussy), “you’re mine,” “say you’re mine,” “you belong to me,” etc it smacked as seriously out of place. It should have undone all his work to convince her she wasn’t a piece of property. It did not fit any of the previous set up of the plot.

Lastly—and again this leads me to wonder if Bethany-Kris isn’t more comfortable with MM—the anal sex. I have no problem with this being included. Heck, change it up on occasion. Great. But the way it was build up as being something special and momentous irritated me. The way her giving him her ass is somehow more meaningful than any of the previous sex, like it’s a culminating act, felt contrived and pointlessly titillating. Plus, I knew with 100% certainty that was going to happen as soon as he mentioned it in the first sex scene. So, it was disappointedly predictable, not taboo and exciting in any fashion. 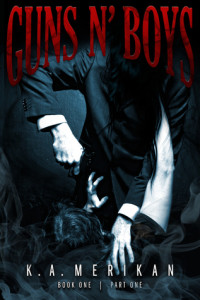