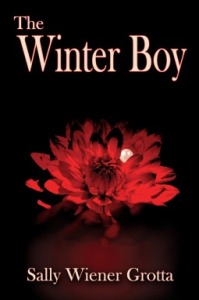 I received a review request/unsolicited pre-approval from Netgalley (what should I call that) to read Sally Wiener Grotta‘s Speculative fiction novel, The Winter Boy.

Description from Goodreads:
The Valley of the Alleshi is the center of all civilization, the core and foundation of centuries of peace. A cloistered society of widows, the Alleshi, has forged a peace by mentoring young men who will one day become the leaders of the land. Each boy is paired with a single Allesha for a season of intimacy and learning, using time-honored methods that include storytelling, reason and sex. However, unknown to all but a hidden few, the peace is fracturing from pressures within and beyond, hacking at the very essence of their civilization.

Amidst this gathering political maelstrom, Rishana, a young new idealistic Allesha, takes her First Boy, Ryl, for a winter season of training. But Ryl is a “problem boy,” who fights Rishana every step of the way. At the same time, Rishana uncovers a web of conspiracies that could not only destroy Ryl, but threatens to tear their entire society apart. And a winter that should have been a gentle, quiet season becomes one of conflict, anger and danger.

Review:
I’m just going to come out and confess up front that this is a hard book for me to review, because I firmly believe it is probably a good book. It’s certainly well written (with the exception of a few too formal quirks I’ll get to in a minute). The problem is that it is also a book I didn’t particularly enjoy and thus its 508 pages felt all but endless.

At its most basic, my problem with the book is that it feels a little pompas, as if it’s trying so hard to be important and meaningful that it just feel staged. As a result, it strikes me as one of those books that we’re all expected to read and hop on the ‘it’s so deep and meaningful’ bandwagon. Meh, I saw where it was trying to go and what it was trying to do (It was hard not to, it was so heavy-handed), but none of it impressed me too much.

Plus, and this is a biggy for me, the Feminist in me squirmed. I had hoped that taking a group of widows with the intent of training men to be better men would feel empowering. Instead, it felt just like one more story in which women set aside their own lives and importance for the betterment of a man.

And I don’t just mean this in the sense that all books should be paragons of feminist mystique, but that from the blurb and numerous hints in the text itself I sensed that it was written with the intent to show women as equally strong, worthy contributors to the societal good. In this, it failed miserably.

Even more so since Ryl came from a society in which women blatantly don’t have equal rights (a fact that effects his beliefs and behaviours in the beginning but is then mysteriously dropped), but it’s quite clear that not all cultures in the book’s universe are supposed to hold with such inequality.  BUT you don’t see those cultures. You’re told they exist, but don’t see them. Every single culture that is discussed (and there are a lot of them) held women in positions of secondary status.

Regardless, it’s still treated as the norm. Rishana still submits to him in many ways, even as she’s said to be doing it to teach a lesson or because challenging him will not further a lesson. Meh, I appreciate what the book was trying to accomplish in this area. I just don’t think it was wholly successful.

If women are meant to have equal rights/powers/positions/respect in the country as a whole, even if not in all individual tribes, why do the Alleshi train ONLY MEN for leadership? It’s kinda a big deal and completely undermines what I perceived to be the book’s intent. Thus, it feels like one more text that touts female empowerment and delivers the “naturalness” of male leadership and women’s, at best, position as an advisor.

It reeks of the familiar myth that women can find true satisfaction and self-worth in taking a damaged or unrefined man and through her love and good heart changing him into a truly good man and live happily ever after. Which, if you take that one step farther, is the myth people used to teach young girls to make them passively accepting of being married to older or otherwise unappealing men.

It could have been something really special, if it hadn’t so often compromised itself by falling back into old, well trodden gender tropes that completely countered what I took to be the book’s intended message. Of course, my understanding of its intent, while valid (as I think any reader’s understanding of a work is valid), may not be the same as the author’s. I have no way of knowing. But this was a big deal for me.

There was unquestioningly a submissiveness to the lessons the Alleshi taught their boys, that is the woman appearing to submit to the boy. Yes, she’s doing it purposefully to teach him, but that same submission and how to expect and accept it is part of the lesson, especially toward the end when he’s supposed to have become an actual man.

There will be some who argue that given what is revealed toward the end, this isn’t the case. But for me it was too little too late. After all they were still only training men to go out, meet new cultures, make decisions and rule each individual tribe.

I did like the use of sex as a predetermined lesson. I appreciated that the author was brave enough to strike out from the cultural narrative that sex is only proper and acceptable for procreation or as an angelic expression of romantic love. It too is a myth and I found exploring other expressions and uses for it satisfyingly adult. Not in any illicit or titilating way, but by provoking thought around a subject most of us are fed a cultural belief system that we’re not supposed to question.

I also appreciate how obviously arrogant Ryl was in the beginning and how the author showed a lot of what most teenage boys probably feel. On the other end of the spectrum, if the arrogance of teenaged boys could be dispelled by good sex and pointed questions in a single winter all our lives would likely be better. It’s not particularly believable.

As I said the writing is largely very good. I occasionally found the dialogue ever so slightly unnatural. I realize it is often meant to be formal and it feels it. But I found myself gritting my teeth at the frequency with characters said “please.” I acknowledge that this is a strange comment, but used repeatedly between two people living together felt out of place. Similarly, characters, far too often used names and titles when speaking to one another.

Since I’m on the subject of names, the use of several names for the same characters seemed needlessly confusing. It is explained and I understand why it was done, but I found myself confused more than once. At one point, you have a single character referred to by three names in the space of a page. And there are several characters this is done with.

There is also a tendency to head-hop, which I found distracting, especially when numerous characters were involved. It was jarring.

Lastly, like Ryl, I got really tired of everything being a lesson. This is part of what I meant when I called it heavy-handed. There are so many ‘teaching moments’ that eventually I felt lectured to.  In the end, I wasn’t sure which the author saw as more important, the entertainment value of the story or the moral lessons she sought to teach the reader.

All in all, it’s an interesting story. With some interesting cultures and precepts. There is a large and detailed (probably dystopian) world developed here. I have no doubt that it will appeal to some. I found it long, tedious and full of things that made me grit my teeth in annoyance.