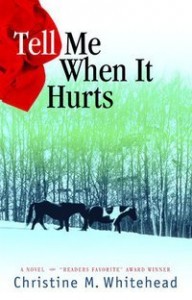 I grabbed Christine Whitehead‘s Tell Me When It Hurts from the Amazon KDP list. At the time of posting it was still free.

Description from Goodreads:
Archer Loh, Ivy League grad and Olympic rider, has been carefully groomed to be a government assassin but, at the moment of decision, she instead chooses law school, her college sweetheart, and a quiet life in Connecticut, leaving her violent apprenticeship behind as her own little secret.

When her only child is murdered and the killer goes free on a technicality, Archer ditches family, career, friends and horses to find justice. Brushing up on her lethal skills, and aided by a shadowy and well-heeled vigilante group, she tries to find meaning in her pain and a reason to keep taking another breath by implementing private retribution.

At her lowest ebb, Connor McCall, Harvard-educated financial baron turned Wyoming sheep rancher, stumbles into her life, bringing with him his own demons. And everything changes.

Review:
I’m a fairly dedicated Fantasy and Sci-Fi reader, but I was in the mood for something a little more down to earth so I picked up Tell Me When It Hurts. Granted, I was expecting a little more The Long Kiss Goodnight or La Femme Nikita than The Horse Whisperer, but it was still a sweet story. I teared up more than once, rooted for the characters and was pleased with the ending.

Archer was mired in guilt and in constant emotional turmoil. She was a little horrible, but who could blame her? Not me. Conner was…oh, Conner was just marvellous. He was one of the best characters I’ve come across lately. I loved him. He sooo deserved to be happy. There were also a whole host of small-time side characters who all had an important role to play and you couldn’t help but like them.

The above sentence, with the movie/book references in it, would fit nicely into the Tell Me When It Hurts. There are a lot of them in the book. It’s a game the characters play, and by extension so does the reader. It was kind of fun and I suspect that there were even more than I was able to catch.

The book did drag a bit in the middle. It wasn’t that nothing happened, in fact a few small but important things occurred. It was just that for a little while there it became a string of mundane occurrences, Christmas shopping, getting the mail, walking the dogs, etc. I know that this was sort of the point. The characters were falling into a life together, but I’m used to a bit more action and was relieved when things picked back up.

The book would definitely appeal to fans of Nicholas Evans more than those of Robert Ludlam, but I recommend it for anyone who likes a story about the resilience of the human spirit and overcoming personal tragedy. 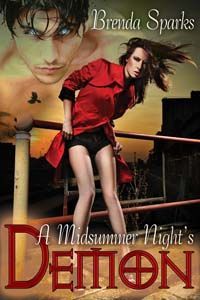 Synopsis:
Daelyn Torres is determined to break free from her over-protective brother. Born a demon, she knows little of the world outside her home and work. A chance blind date promises adventure and perhaps a walk on the wild side. But her night on the town takes a deadly turn when she is gravely injured and left to die. A handsome, mysterious stranger comes to her rescue and brings with him a passion she has never experienced.

A dark guardian sent to investigate a series of missing person cases, vampire Ky Robinson is ready for anything, except the insatiable desire that engulfs him when he meets Daelyn. He senses their destiny is intertwined and vows to do everything in his power to keep her safe. The only problem: demons and vampires go together like fire and ice.

Daelyn never believed in things that went bump in the night but is more than willing to be seduced by the sexy vampire who marks both her body and soul. Will Ky be able to keep them both alive long enough to prove that vampires and demons can be so much more than friends?

Review:
While entertaining, A Midsummer Night’s Demon left me scratching my head. Daelyn Torres is supposed to be a demon, but what kind I just don’t know. Not only is she extremely sweet and naive, she’s also an ACCOUNTANT with a penchant for SUN DRESSES. We sure aren’t talking Mephistopholes, Belial or the Christian hierarchy here. In the end it didn’t really seem to matter. Other than longevity her status as a demon might as well have been any other cultural quirk. She could have been a practitioner of Wicca or a dedicated Buddhist, the effect would have been the same.

For a full 83% of the novel I also kept waiting to meet the overbearing brother mentioned in the synopsis. He plays almost no role in the novella, which means that the blurb is being used to provide background information not present in the book. My gut reaction is that that isn’t right. It just seems that all pertinent information should be contained within the story itself.

Then there were the unanswered questions. What was the secret mission Ky’s partner was off on? She was introduced briefly but disappeared. Why was Raziel acting out of vampiric character? What happened to Daelyn’s parents?

Really most of the above could have been addressed by more bulk. Had the book been a bit longer it could have addressed Daelyn’s background and family history, as well as explored the demon angle enough to give it a purpose. The side characters could have been fleshed out and explained. Despite my general sense of confusion I did enjoy the book. Ky was just fabulous. It would be almost impossible to not love him. He was kind, considerate, handsome, patient, sexy and funny. Daelyn simply existed. She was the woman who passively accepted Ky’s affections. But so many PNR females are just the same, so I can’t really complain about her lack of volition. The writing was fine and I don’t remember many editorial errors. All in all it was satisfying enough.

I Won a signed copy of Bella Forrest‘s A Shade of Vampire from Layers of Thought. I included both the new and old cover just to be awkward. 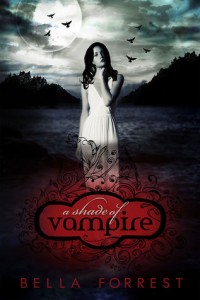 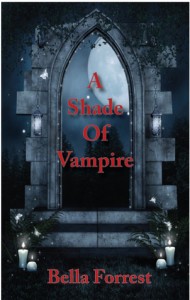 On the evening of Sofia Claremont’s seventeenth birthday, she is sucked into a nightmare from which she cannot wake.

A quiet evening walk along a beach brings her face to face with a dangerous pale creature that craves much more than her blood.

She is kidnapped to an island where the sun is eternally forbidden to shine.
An island uncharted by any map and ruled by the most powerful vampire coven on the planet. She wakes here as a slave, a captive in chains.

Sofia’s life takes a thrilling and terrifying turn when she is the one selected out of hundreds of girls to join the harem of Derek Novak, the dark royal Prince.

Despite his addiction to power and obsessive thirst for her blood, Sofia soon realizes that the safest place on the island is within his quarters, and she must do all within her power to win him over if she is to survive even one more night.

Will she succeed? …or is she destined to the same fate that all other girls have met at the hands of the Novaks?

If Edward Cullen had ever been forced to rule a hidden enclave of vampires he would definitely be named Derek Novak. No doubt about it. A Shade of Vampire is a quick little YA read that Twilight fans will love. The problem is that I’m really not a Twilight fan. So in order to give this book a fair chance I tried imagining how I would have reacted to it if I was still an angsty teenage girl. Certainly Sofia is described as a smart, slightly quirky, wall flower. I can relate to that. She’s secretly crushing on her popular best friend, who I THINK she lives with. I guess I can relate to that too. (Though the whole living situation was never very clear. Apparently she was abandoned, but I never could grasp the details. Maybe I’m wrong.) I had to wonder a little bit about the whole high school clique thing though. I mean if he’s popular and she isn’t how are they best friends? I don’t really remember cliques being so accepting of such social transgressions. In the end I decided that I can relate to Sofia’s life prior to the vampires, but not after. Once she is taken to the Blood Shade I could do nothing but shake my head.

Derek wakes from a protracted sleep and INSTANTLY falls for little ‘ol Sofia. What does he fall in love with? Well, I don’t want to give anything away, but it isn’t anything the other girls don’t have too. So, really the question still stands. Sofia, in turn, is either exceptionally susceptible to Stockholm Syndrome or has no sense of self-preservation, because she is feeling Derek in return. She is falling in love with his kindness, which, honestly, feels misplaced. Really there is a whole undercurrent of incongruous innocence in this book. It’s in small things, like the keeping of harems and constant references to playing with their beautiful slaves, or the leers Sofia is subjected to but the complete lack of follow through or sex of any kind. Example: the girls are all kidnapped when they are 17 because they mature and taste sweetest when they turn 18. Now, the whole blood letting/sex connection is pretty blatant, so the message is essentially that the girls will be ravished, but not until they conveniently (and coincidentally) come of legal age. Riiighhht. The novel is so sexually charged that this absence is conspicuous. I realise that as a YA novel it shouldn’t really have any, so maybe the suggestion needed to be pulled back a little.

I have a guess about where the story will go from here and I’d be willing to read a sequel to see if I’m right or not. With the exception of the constant and annoying one sentence paragraphs (I was always told a minimum of 3 BTW) it reads fairly smoothly. (Though to be fair Derek’s dialogue is a little too smooth for someone who’s been asleep for 400 years. But since I wouldn’t really want to slog through the old English I’m more than happy to let that pass.) It was also interesting to be able to see both sides of Sofia and Derek’s interactions. Sometimes their actions held different meanings for the two of them, but were still meaningful to both. I thought that was very cleverly played. All in all I thought it was OK, but I’m well aware that there will be those who love this sort of story and they will, no doubt, really enjoy it.