It’s New Years Eve, 2017, and another year is gone. How? HOW? I remember being a kid and hearing my parents talk about how fast time goes and being baffled. I mean summers seemed to last an eternity and Christmas took a decade to get here. But I’m all grown up now and I get it. Time slips by.

I know not everyone does it, but I mark its passage with books. Have I read ten so far? Twenty? Two-hundred? Three? This year it was 301. Granted, a few of those were children’s books or short stories and this was the year I really dove into audio books. But I still consider that a pretty good number. More than I expected, honestly. I set my initial year-long goal at 250 books.

As I’ve said in the past, I generally use Goodreads to keep track of things—books I’ve read, mean to read, own but have decided not to read but can’t bring myself to trash (gasp, the horror), etc. And while I don’t use star rating here on the blog, so that readers pay more attention to the content of a review than the numerical marker of success or failure, I do rate them on Goodreads; who conveniently produces a nice little graphic about them. Tada! 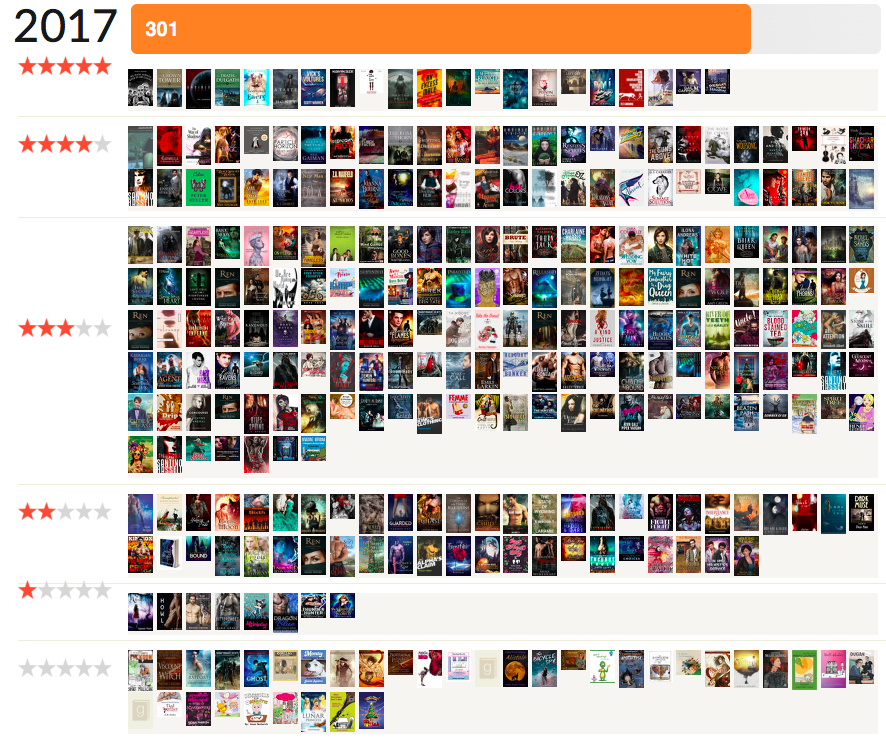 That’s a lot of freakin’ books and looking at it makes me feel incredibly satisfied. I’ll just take a moment to bask in it, thank you very much.

So, what were the highs and lows of 2017’s reading, or even just what stands out? Blue aliens. Seriously, at one point I started collecting book covers with blue aliens on them. I gave up at about 130. Once I started looking, I saw them EVERYWHERE! Thousands and thousands of blue aliens, apparently they don’t come in other colors anymore.

OK, more seriously. I didn’t have a lot of standout books this year (I read a lot of fluff, I admit it), but those that struck me as especially worthwhile were All Systems Red, The Hate U Give, Peter Darling, The Rules and Regulations for Mediating Myths & Magic, and  Vick’s Vultures;

with The “Wonderful” Wizard of Futhermucking Oz , Resistance, Shifting Dreams, and Twelve Days of Fairy maybe not topping the list, but sticking with me as memorable for their own reasons.

I won’t do a worst of list, but I will note two particular rants I found myself making several times this year. Spinoffs, I cannot tell you how many times I picked up a book thinking it was book one in a series, only to discover that it was actually book one in a spinoff series. Sometimes this was readable—The Crown Tower, The Stone in the Skull and The Way of Shadows being examples—but sometimes I felt like I was picking up book #14 in a series. Sometimes that’s actually what I was doing, the publisher just thought it would sell better if called a new series. I’m getting increasingly sensitive about this, because it just keeps happening to me.

Secondly, I discovered the phrase Book Stuffing/page stuffing. This is something I’d noticed and been irritated by, but didn’t know there was a name or reason for it. The idea being that an author or authors take a cluster of stories or books, makes one of them the title of the “book” and calls all the others “bonus material.” They then take the same stories, call another one the title and mix up the order of the rest and call it a second “book.” Doing this for every one in the collection, such that there are several “books” containing the same material.

The idea is apparently, as I understand it, to have a high page count. This is important because Amazon KU pays authors by the number of pages read, not books sold. The author then includes a link at the end of the primary book to a ‘sneak peak’ or some other enticement that bypasses all the bonus material and leaping to the end, thereby marking them all as read and gaining several hundred page reads and a high payout.

So, these book stuffers are breaking Amazon’s rules to essentially rig the system, sucking more than their share of the KU earnings into their own coffers. They also regularly snatch the monthly KU bonuses and usurp all the top spots on the charts, such that authors playing by the rules are payed less and struggle to gain any visibility.

I don’t have any books in KU. So, on a personal level this doesn’t effect me. What does is the fact that before I learned what this is, I picked up a couple of these stuffed books and read at least some of several of them. They were just terrible. They’re not written to actually be read, after all. The title story was crap all by itself, before I even got to the idea that I thought I was in for a 400 page book, but instead of ten 40 page stories. As a reader, I felt cheated and manipulated. I felt like I had been taken advantage of and lied to. This feeling only got worse once I realize it wasn’t just an annoying way to sell short stories with bad writing, but an actual scam.

It’s my understanding that Amazon is trying to get a handle on this, so maybe it’s no longer a valid complaint and won’t matter for 2018. But it sure was something of note for me in 2017.

Let’s see, what else? Challenges? I didn’t do anywhere near as many challenges as I have in the

past. I did an alphabet challenge, where I read a book by an author who’s last name starts with each letter of the alphabet. I did an Action Heroine challenge on Goodreads. I started a mini challenge to read all the paperback novellas on my shelf. I promptly forgot about it though. It’s amazing how I can look over a stack of books on my desk for months. So, I’m calling this one ongoing, I’m about halfway done.

I tried to read more local authors, though I never made this an official challenge, and I made a concerted effort to read more diverse books. But, while I started the year planning to do an actual Diverse Romance Bingo card and a Read Diverse 2017 challenge, I didn’t keep up. I didn’t remember to go back and check the card and the Read Diverse blog hasn’t been updated since April, so I haven’t been able to post there. (I believe the blogger got married and priorities changed. Fair enough.)

I have also had the honor of reading several books or stories by people I’ve gotten to know online. Ladies, you know who you are and you are amazing. Not all the genres are in my wheelhouse, but it’s been amazing to follow the creative process, especially since (despite my intentions) I did very little writing this year. 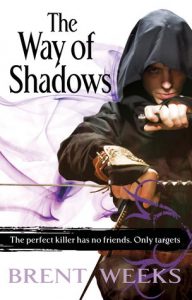 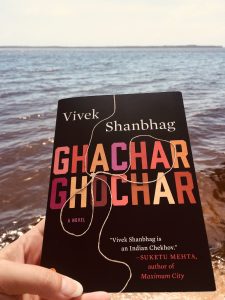 Description:
For readers of Akhil Sharma, Mohsin Hamid, and Teju Cole, a haunting, masterly novel about a family splintered by success in rapidly changing India.

A young man’s close-knit family is nearly destitute when his uncle founds a successful spice company, changing their fortunes overnight. As they move from a cramped, ant-infested shack to a larger house on the other side of Bangalore, and try to adjust to a new way of life, allegiances realign; marriages are arranged and begin to falter; and conflict brews ominously in the background. Things become “ghachar ghochar” – a nonsense phrase uttered by one of the characters that comes to mean something tangled beyond repair, a knot that can’t be untied.

Review:
Interesting, I think that’s the right way to explain my thoughts on this book. It’s an interesting look into the lives of a somewhat dysfunctional family. But it also leaves you wondering and speculating at the end. What really happened? Did anything really happen. If it did, who is responsible and who actually knows.

Ghachar Ghochar is a quick read, but packs a lot of punch in it’s pages. Well worth picking up.