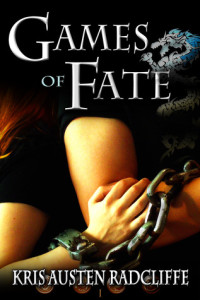 I grabbed a copy of Kris Austen Radcliffe’s  Games of Fate from the Amazon free list.

Description from Goodreads:
Rysa Torres’s stumbles through life an overwhelmed young woman fighting against her attention deficit disorder. She can’t get a handle on the world, no matter how she tries.But when monsters activate a part of her she didn’t know she had, Rysa becomes the Fate at the center of an epic battle against a terrifying future—and a world consumed by fire.When Ladon and his companion beast, Dragon, find Rysa, they see only the potential hell a young Fate might unleash into their lives. But Ladon quickly realizes Rysa is much more than the daughter of an old enemy—she is his key to forgiveness.With the threat of a burning future distorting Rysa’s Fate abilities, she sees only two options: End her own life, or watch Ladon, the only man to see beyond her attention issues and love her for who she is, die. Will they accept the only future they see, or will they find the strength to break the bonds of fate?

Review:
I only occasionally use star ratings on this blog, essentially only when I can make a point with them. As I can now. I really want to give this book a low 2 star rating, because I really didn’t enjoy it. But I’ll drag it up to a 3 because a large part of what I disliked is the result of me not being the proper demographic for the book. Plus, the writing is honestly fine. (Though the book did feel overly long, some passages seemed to drag and deus ex machina solutions are never good, IMO.)

Before I get into the review, I’m going to talk a bit about myself. This is to centre me as a reviewer so others can understand where I’m coming from in my review…what type of reader I am. This should help others in deciding if my review would be pertinent to them or not. For those much like me, I hope it will be, but it probably won’t be for a lot of others.

I’ve not read a lot of New Adult books. Of the few I have read I found that they tend to encompass all the worst (most annoying) traits of Young Adult literature, except the heroine is in college instead of high school and they include sex, or worse, a lot of angst about if they should be having sex.

The thing is that I’m a woman in my mid-thirties who has been married for a dozen years. I can no longer relate to this whole internal agony over such a decision. It’s not that I don’t respect it as an important one, but whole plots that hinge on or are simply cluttered with an endless litany of yes, no, yes, no, maybe, I want, I don’t want, I crave, I don’t crave, I cry, I push him away, I pull him near, I give in, I regret, I make a big deal of my own decision, etc drives me away as a reader. So, from the get go, I’m always a little wary picking up a NA book. I always hope for the best. Why else would I bother? But I’m more often than not disappointed.

Despite my misgivings about it being NA, I had such high hopes for this book. It has dragons in it! Yes, fates too and they’re cool…but DRAGONS, my favorite mythical beast.

The plot is basically that a new Fate is born and a human/dragon pair rescue and fall in love with her. There’s a bit more to it, but not much.  The vast majority of the 300+ pages is dedicated to worshipping Rysa.

Now, I understand that the target audience is women in their early twenties who are likely in the stage of life when they are looking for someone to make them feel special. However, I eventually started gagging on all of Ladon’s obsessive appreciation of her and how he wanted to protect her, coddle her, make her happy, bla, bla, bla.

It’s not that I mind it in and of itself, but it was ennnnddddllllesssss. And being coupled with Rysa’s cliché, no man looks at ME that way, no one’s ever told ME that I was pretty, I’m ugly, awkward, a spaz, etc pushed it into annoying overdrive.

Then there was the ex-boyfriend issue. Apparently, he was a selfish and unconcerned lover, as many young college-aged men are wont to be. But is bad sex really worth counselling, low self-esteem and a hesitancy to trust any other men? Seems a little extreme. The guy certainly deserved to be slapped something fierce, but it hardly equates to grievous harm.

If she’d been raped or abused I could see it, but being so emotionally damaged over something so slight makes her seem very, very weak. It makes it feel like she has no emotional armour or resilience, which is one of the most important parts of a heroine’s strength. I simply don’t like to waste my time with female leads of the victim variety and a woman who is so easily injured and has NO CONTROL OVER ANYTHING, even what’s in her own head is nothing but a victim. She’s no fun to spend time with or root for.

Additionally, there is no downtime in the book. It’s run, cry, confusion, on a constant stream. It’s too much. The only exceptions are when Rysa repeatedly just lets bad things happen to her because she suddenly and inexplicably can’t think straight, or can’t remember, or can’t control herself, or someone else can control her mind. Victim. Victim. Victim. Blerg.

Irritating me more even than all that, was the subtext of her sexuality.  Whenever she was conscious she pushed Landon away, but whenever she was unconscious, she was literally crawling all over him, rubbing, kissing and seducing him. As if to suggest that any “good girl” couldn’t possibly also be sexually forward and secure in her own desires. In order to be that, she has to be unconscious and devoid of responsibility.

I mean she had to be punished with bad sex and emotional damage for daring to have sex in the past! If I really wanted to drag this point out, I could break the events down further to show how they reinforce this same idea. For example, the one time she pseudo-initiates sex, it is immediately followed with tears, fear and guilt because some horrible realisation crashes down on her as a direct result of allowing herself to “impulsively have sex with Ladon.” However, the one time her frail sensibilities are essentially overwhelmed by his intense passion they get their happy night together.

This is a trope I see a lot of and HATE. I’m not a prude but I must ask, is this really the message we want to still be sending young women approaching their own sexual maturity? That in order to enjoy, or even personally want sex they have to abdicate all responsibility for it and they’ll be (deservingly) punished if they don’t? I’d hoped we’d grown beyond that.

There was also the small matter of the insta-love, or at least baseless love. Since the action essentially never stops, there is no point at which the characters could slow down and have a conversation. They were never given the chance to get to know one another, so what was their love based on? I especially felt this lack of development in Ladon/Dragon’s extreme loyalty and dedication to her and her safety and happiness.

Now I can’t blame all of my dislike on being too old to appreciate the genre tropes. And honestly, that’s most of what I dealt with here. I also spent a lot of time gagging on the incredibly descriptive, purple prose used to describe Rysa’s experiences or visions. And while I understood that she was tied to chaos, I was quickly annoyed with the pages and pages of confusion and discordant havoc. There were a lot of times that I simply couldn’t understand what was supposed to be happening or had simply reached my limit of ‘it’s all crazy and unexplainable because of her ADHD.’

Speaking of her ADHD, I thought that it was over emphasised, even before she went all Fate, vision-laden über ADHD. It just felt like one more way to weaken her so that Landon could more fully protect her.

The book also has the same problem a lot of such books have. Rysa is essentially psychic, but for more than half the book she somehow still manages to misread every obvious signals Ladon throws her. And there are a lot of really obvious ones and very very few contradictory ones. The man wants her with every fiber of his being, practically from the moment he meets her and he’s pretty clear on that. But still Rysa, who can see the past, the present and the future and knows they’ll end up together in some way at some point continues to think of herself as nothing but an unwanted burden to him. Um…either she’s REALLY dumb, which we’re told she’s not or this is a giant fault line in the plot to keep the angst high and the story rolling along.

Lastly, I was left wondering about all the characters who were introduced and then dropped. What happened to Gavin, Marcus and Harold? They all just kind of disappeared.

I did like that there is an effortless gay couple. By effortless, I mean that no big deal was made of it. It was as unworthy of extra attention as any het relationship and I appreciated that. I know that mentioning it at all counters that same easy existence, but I can’t compliment it if I don’t and I’d like to see more such inclusions in fiction, which requires that people make it known that they like finding it.

All in all, not a winner for me personally. But I’m owning up to the fact that it really might be me, not the book that was the problem…Or, at least, the pairing of me and this book. I know a lot of people really like the heavy-handed romances. To each their own.