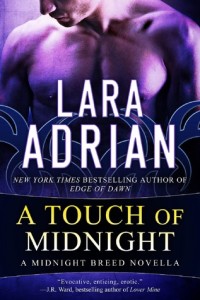 Description from Goodreads:
Savannah Dupree is halfway across the country from her Louisiana bayou hometown, a freshman studying at Boston University on a full scholarship. But academic excellence is only one of Savannah’s gifts. She possesses something even more remarkable than her quick mind and insatiable curiosity for learning. With a simple touch, Savannah can see an object’s past—a skill that puts her life in danger, when her studies bring her into contact with a centuries-old English sword and the secret hidden within the blade’s history: the vicious murders of twin boys by a group of fanged creatures borne of the worst kind of nightmare.In all his three hundred years of living as one of the Breed, vampire warrior Gideon never dreamed he’d see the blade again that spilled his young brothers’ lives ages ago on that blood-soaked night in London. Ever since the boys’ deaths, Gideon’s been on a personal quest to rid the world of Rogue vampires, but now he can’t help wondering if the brutal slayings of his only kin was something more sinister—an act perpetrated by an unknown enemy. An enemy who is apparently living in hiding somewhere in Boston. There’s one certain way to prove Gideon’s suspicion, but it will mean using innocent, gifted Savannah to help uncover the full truth—a truth that will shatter everything she knows about herself and the world around her. And with danger closing in from all sides, the passion that ignites between Gideon and Savannah will tempt them to risk their hearts and lives for a love that might just last an eternity…

Review:
Pompous, overwritten, rushed and containing every cheap PNR cliché known to man. However, I think (though I may be giving it too much credit) that since this was published well after the bulk of the other books, it is intended for pre-existing fans of the series, whose well entrenched love of the Breeds would carry the day. Perhaps it has more meaning and resonance for such readers. This is the first of the Midnight Breed books I’ve ever read and I WAS NOT IMPRESSED. 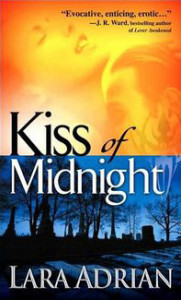 Description from Goodreads:
He watches her from across the crowded dance club, a sensual black-haired stranger who stirs Gabrielle Maxwell’s deepest fantasies. But nothing about this night—or this man—is what it seems. For when Gabrielle witnesses a murder outside the club, reality shifts into something dark and deadly. In that shattering instant she is thrust into a realm she never knew existed—a realm where vampires stalk the shadows and a blood war is set to ignite.

Lucan Thorne despises the violence carried out by his lawless brethren. A vampire himself, Lucan is a Breed warrior, sworn to protect his kind—and the unwitting humans existing alongside them—from the mounting threat of the Rogues. Lucan cannot risk binding himself to a mortal woman, but when Gabrielle is targeted by his enemies, he has no choice but to bring her into the dark underworld he commands.Here, in the arms of the Breed’s formidable leader, Gabrielle will confront an extraordinary destiny of danger, seduction, and the darkest pleasures of all. . .

Review:
Blerghhhh. Let me just pause to clean up the vomit…ok, moving on. I absolutely, 100% do not understand why people love this series! It’s horrible. I picked this book up from my local library, but prior to reading it I read the freebie prequel A Touch of Midnight. Of it I said, “Pompous, overwritten, rushed and containing every cheap PNR cliché known to man…I WAS NOT IMPRESSED.” This one wasn’t rushed; I’ll give it that. But the rest of that sentence is true. It was also incredibly, I mean INCREDIBLY predictable. The dialogue was stiff and overly dramatic. There were numerous large, dull info-dumps. I knew what would happen at every stage of the game. A lot of hated PNR tropes were simply strung together and called a book and the plot was so thin cheesecloth would feel more substantial. What’s worse, I hated the characters. Lucan was just a selfish jackass and at no point did I feel he redeemed himself. And Gabrielle was TSTL. I mean, with the exception of the times they were in bed, she spent the whole book being angry, annoyed, or scared of Lucan. So…what exactly did she fall in love with? Then, of course, because she has to throw herself into stupid danger (can’t miss that tripe…excuse me, trope) she decides to leave all safety behind in a huff because she’s mad at Lucan. Dumb. Plus, can I just vent a moment on how much I hate how common it is for heroines to doubt their own sanity. It’s just a cultural reaffirmation of the idea that women aren’t as strong in the mental department as men. She’s made to look emotionally and mentally weak so that she needs a strong smart man to make all her decisions for her. Ugh. Gross.And, and, while on hated tropes…being seduced in her sleep, denies her volition and accountability of her own sexuality. Not to mention, seriously people, no woman would sleep through a man sneaking into her bedroom and performing oral sex on her. The first dip of the mattress would have most women up and screaming in fear, not pleasure. I hate this romantic trope so much.Yeah, so, so, so, yeah, I have no more words for how much I hated this book.