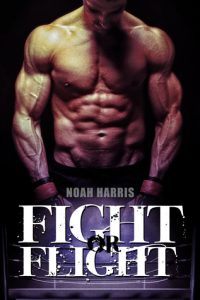 I picked up a copy of Noah Harris‘ Fight or Flight at Amazon when it was free. It was still free at the time of posting.

Description from Goodreads:
Bryant had always been a fighter. He had fought to keep his family together, and after his father’s death, he had fought to get custody over his little sister. He fought to keep them fed, and he fought to keep a roof over their heads. And he did so by picking up his father’s old profession: illegal werewolf fights. It was a dangerous profession, but he made good money. It didn’t leave much room for a social life or romance, but he liked it that way. Those were just distractions from what needed to be done. He was convinced he didn’t want a relationship.

That is, until Jake walked into his life: an inexperienced rookie with firm determination, an eagerness to learn, and a secret of his own: he’s actually an Omega. Against his better judgement, Bryant agrees to train him but soon finds himself fighting once again. Only this time, he’s fighting himself and his overwhelming attraction for Jake. He soon learns that some fights aren’t meant to be won.

Review:
Sooo, this might have made a good novella, but there really isn’t enough of it to fill 300+ pages. It’s repetitive and slow. Plus, the Amazon description states, “Set amidst a strongly constructed shifter world of werewolf fighting…” But the reality is that there basically isn’t ANY world-building at all. And what very little there is, like alpha’s going into rut and trying to rape any omega they scent, doesn’t really even make sense. Plus, there is very little werewolf action in this werewolf novel. 90% of it might as well be a contemporary m/m romance. The mechanical writing is fine (though heavy on the tell) and I liked the characters (though I thought Jake was stupid and selfish for continuing to knowingly endanger everyone). But the book was less than satisfying.