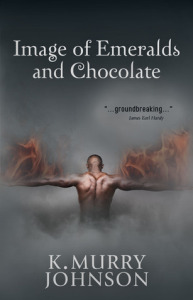 I picked up a copy of K. Murry Johnson‘s Images of Emeralds and Chocolate from my local library.

Description from Goodreads:
In his breakout novel, K. Murry Johnson combines two never before paired genres: black gay and vampire fiction. Set in Louisiana, Image of Emeralds and Chocolate masterfully explores the past and the present. The novel speaks to all who have ever dreamed of finding romance, and captures the national obsession with vampires. The story follows Eric Peterson, a talented high school senior enrolled in a creative writing course at Loyola University. Insecure and inexperienced, he often daydreams about finding love. His fantasies quickly become reality when a strikingly attractive new student, Marquis LeBlanc, is assigned as his writing partner. But the man of Eric’s dreams is hiding something. Marquis has been severely depressed for a very long time. His therapeutic motive for enrolling in a writing class is abruptly derailed when he unexpectedly falls in love for the second time in his life. If Marquis reveals his secret, will Eric accept him…or even believe him?

Review:
I’m not going to lie. When I grabbed this book to read, I never made it past the cover (Gawd, I love a fit man’s back!) and the first sentence of the blurb. “In his breakout novel, K. Murry Johnson combines two never before paired genres: black gay and vampire fiction.” Yep, that was enough for me. Some racial and sexual diversity in a PNR/UF book? Hell yeah, I’m all for that! A black, gay vampire…*happy sigh.*

My hopes were sky high. I really wanted to love this book. I really wanted to finish it and rush out to recommend it to all my friends. The thing is that I just can’t. I still think it deserves tons of accolades for filling a niche that is in desperate need of attention, but it suffers from what I’ll call first-time-author syndrome.

The writing is very simplistic. It’s of the Eric did this, Eric said that, Eric went here, Eric thought that and THEN (big surprise) Eric felt something else sort. It’s functional. The book is even well edited. But it’s painfully straightforward and almost impossible to immerse yourself in.

I strongly encourage Johnson to keep writing though, because IMO a lot of the detractors of this book are things that will improve with practice. I’m no expert, but the anecdotal evidence of reading hundreds of books a year (many by new, Indie or SP authors) is that the too frequent use of names, stiff dialogue, understanding that some regional dialectic speech is good, while anything past some fuzzy ill-defined line of more is bad, too many unnecessary details and personal histories cluttering a narrative, annoying internal dialogue, anachronistic (if idealised) language, beliefs and behaviours, the unfailing need for a character to be involved in every historical event in recent history, and the ability to let a joke stand on its own, without the need to explain it all eventually smooth themselves out with more experience.

So, I was generally disappointed in the mechanics of the book. I was also disappointed to discover that this is a Young Adult novel (maybe New Adult). Phooey. I wanted some hot, chocolate, vampire sex. Yes, I did. And I just didn’t get it. Instead, I got a trash-talking, teen genius coming to terms with his own sexuality. It wasn’t the book I hoped it would be. Oh well.

It was however very obvious that Johnson put a lot of himself into his story. And I always make an effort to be cognisant of myself as a reader, especially when I’m probably not the intended audience of a text. Because Johnson’s acknowledgements page makes it plain that he is writing for men like himself, not women like me.

I read an interesting blog post recently. It was a bit of a thought exercise about understanding the effects of the fact that much of the  M/M literature being written is targeted to cis-gendered women (female identified straight women) and what this means to LGBTQ readers trying to find books that realistically represent themselves, even in a genre that should be for (not just about) them. This means the issue is fresh in my mind.

Johnson claims to have written this book for young, gay men of colour. That’s the target audience and I’m not an African American gay youth. If I was and was looking desperately for a character, any character, even just one measly character that I could relate to in the PNR/UF genre this would be about as close as I can imagine easily coming. So I have to be careful to not criticise the book for simply not being another M/M book targeted at me—a straight, white woman.

I think it probably accomplishes its goal of contributing some much-needed diversity to the PNR/UF genre. The writing and story just needs to be smoothed out. And I think the public service announcement aspects of it needs to have been dropped.

Turning a novel into a PSA is a personal no-no. This book addresses gay marriage, AIDS exposure among the 15-25 age cohort, the importance of safe sex if abstinence isn’t a realistic option, identifying possible racial discrimination, etc.  These are important issues. However, each is shoehorned into the plot unnaturally. It felt just like what it probably was, an attempt on the author’s part to get the message out to young readers. A fictional novel just isn’t the place.

So, I’m torn. The book wasn’t the hot vampire romance I hoped it would be. In fact, the vampire aspect played very little part in the book at all. It was predominately a coming of age story and a lot more time was spent with Eric and his school, friend, family and band issues than the romance or the vampire aspects. It made me pout. However, for someone who is looking for that type of book and is comfortable with plain, straightforward, unembellished writing this is a good candidate.