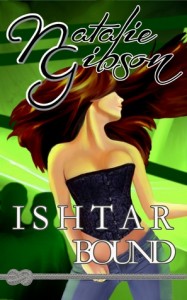 Description from Goodreads:
Surrounded by magical enemies with an intimate knowledge of her abilities, a matchmaking witch of the highest rank must fulfill both her duty to her coven and her desire for a love of her own, even if the two goals collide.

Maeve Lovejoy has always been good at her job even though her service comes at such a high cost. Though her matchmaking abilities are stronger than ever, the most potent in any coven’s recorded history, her introduction to Aaron has confused matters. Believing she’s found a partner who can love her and allow her to continue practicing her arts, she shares her secrets with him. Is it a coincidence that soon after, that same information is used to locate and murder Maeve’s matches? When Aaron goes missing, is it because he is a member of a rival black magic sect or because he has fallen victim?

Slightly spoilerish review:
Ishtar Bound was an interesting read. It revolves around a coven of witches who use the energy created during sex as the catalyst for their power. The main character, Maeve, is responsible for creating the matched couples who will produce that power. The problem is that someone seems to be killing off her matches in an attempt to cause something horrible.

There is a pretty good mystery here. Gibson throws out a couple red herring so that the bad guy isn’t completely obvious and the characters are engaging. A lot was left unexplained though. Who are the Guardians (I know what, but who)? What is the role of The One and how does she relate to Samsiel? (I understood the prophecy, but I could have done with a bit more solid info.) How did Natalia and, by extension Maeve, come to the Daughers and how come the boys (JD, Lucas & Aaron) were so willing to accept the women’s powers, was this not otherwise our normal society?

For the record, IMO despite it’s description on Amazon (Paranormal Erotic Romance/Urban Fantasy), I would consider this a paranormal romance at most. The focus is definitely on romance, not sex. There just isn’t enough sex in it to be considered erotica. There is only one real sex scene, a few fondling scenes and a couple almost rapes. (That sounds like a lot, but it’s not in context.) The author has a strange tendency to combine knives and sex which might be considered a little farther out than normal though. This actually bothered me a little. I would expect the bad guy to pull knives, but even the good guy/romantic interest reminded Maeve he had a pocket knife between her legs at one point and then pulled a butcher knife on her at another time to keep her with him against her will, or at least her better judgement. He started to feel just a little crazy himself. I think it was supposed to feel desperate and it did that too, but definitely unstable.

All-in-all it was an enjoyable read. It felt like it wrapped up a little too easily, but I’ve decided that this is because it is the first in the series and there is more to come. More importantly, it did actually end. The last chapter was definitely an opener for the next book, but I didn’t finish feeling like the story didn’t end.