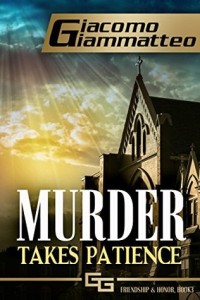 I bought a copy of Murder Takes Patience, by Giacomo Giammatteo. It’s book III of the Friendship & Honor series. I previously reviewed books I & II, Murder Takes Time and Murder Has Consequences.

Description from Goodreads:
Even good people are haunted by nightmares. Some are kept awake by things they did in the past: Lies they told, people they cheated, laws they broke.

The ones who lived the worst lives are haunted by more than lies or broken laws. Their sleep is stolen by the people they killed.

Nicky Fusco isn’t like any of them. He’s not bothered by lies, or broken laws. Not even by the people he’s killed.

Nicky is kept awake by the people he hasn’t killed yet.

A Pre-Read Note:
I just finished a book I didn’t enjoy. I disliked it so much, in fact, that I didn’t even bother with a blog post about it. But I don’t want to end 2014 on such a sour note. So here at the final hour, I’m pulling out a standby author, one I can count on to write a book that will leave me sated and happy. Giacomo Giammatteo has become one of my favorite authors and is probably in my top five favorite Indie authors (if you separate Indie and traditionals, which I do simply because I’ve had a lifetime to discover traditional ones and only about 2.5 to discover great Indies). G.G. don’t let me down now.

A Post-Read Review:
*Sigh* Yes, I’m a happy reader. Really I could stop right there. I read this book. I’m happy as a result. Something about Giammatteo’s writing always clicks with me and I long ago fell in love with Nicky Fusco and Frankie Donovan.

Nicky is something like Leon, from The Professional, in the sense that he is stone cold and somehow soft at the same time. It’s a heady mix. Frankie is the classic good cop who struggles with doing the right thing while honoring his older loyalties at the same time.

But there are so many layers and so much enmeshment between the two men that nothing can ever be straightforward again. Frankie’s ability to remain a clean cop often comes at the expense of Nicky’s willing ness to get his soul dirty. Thus, there is so much guilt and love and sacrifice and giving that goes on between these two men that the reader just melts.

I have to admit that I didn’t think this book was quite as well polished and finished as previous books. I noticed a few editing mishaps and didn’t love thing quite as much as in Murder Takes Time and Murder has Consequences, but this is still ranking in best of 2014 list.