I won a copy of David Clawson‘s My Fairy Godmother is a Drag Queen through Goodreads. 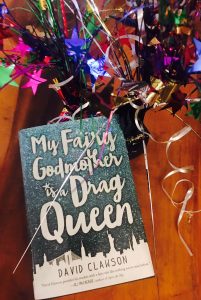 Chris Bellows is just trying to get through high school and survive being the only stepchild in the social-climbing Fontaine family, whose recently diminished fortune hasn’t dimmed their desire to mingle with Upper East Side society. Chris sometimes feels more like a maid than part of the family. But when Chris’s stepsister Kimberly begins dating golden boy J. J. Kennerly, heir to a political dynasty, everything changes. Because Chris and J. J. fall in love . . . with each other.

With the help of a new friend, Coco Chanel Jones, Chris learns to be comfortable in his own skin, let himself fall in love and be loved, and discovers that maybe he was wrong about his step-family all along. All it takes is one fairy godmother dressed as Diana Ross to change the course of his life.

My Fairy Godmother is a Drag Queen is a Cinderella retelling for the modern reader. The novel expertly balances issues like sexuality, family and financial troubles, and self-discovery with more lighthearted moments like how one rogue shoe can launch a secret, whirlwind romance and a chance meeting with a drag queen can spark magic and light in a once dark reality.

This was cute and funny, but there were several moments that made me think, “As not a member of X minority group, is it ok to laugh at this?” A feeling that might not have been so strong if all the characterizations hadn’t been quite so stereotypical. To be fair the title and purposeful riffing of Cinderella do give a clue that it is that sort of book, one that is playing with pre-existing ideas. But I don’t think it was quite deep enough to be considered a deconstruction, exploration or even parody of those same ideas. I also had trouble with some of the language around gender, women, LGBTQI+, Drag and more.

Those who can’t tolerate cheating in a book, especially cheating with a woman in their M/M, this is not the book for you. The whole thing is two gay men and their beard. I appreciate the way Clawson presented a gay man circumstantially unable to come out and that he never let Chris demand that J.J. do just that to prove his love. But as is almost always the case in such stories, I don’t think the emotional damage possible to the woman a gay couple hid behind was considered at all.

Writing is clear and easy to read, though repetitive at times, and it’s well edited. Basically it’s one of those books that I liked but found problematic.