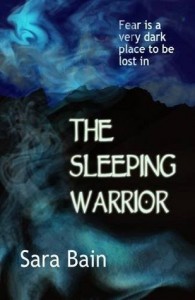 Author, Sara Bain sent me a copy of her novel, The Sleeping Warrior.

Description from The Goodreads:
LONDON solicitor Libby Butler’s life is in a mess. Her affair with her boss is going nowhere as is her position in a city law firm. A narrow escape from the knife of south London’s elusive serial murderer, The Vampire Killer, has challenged her outward bravado and left her nerves in tatters.

When duty calls Libby to a police station in the middle of the night, she meets the enigmatic Gabriel Radley. Dressed like an ancient warrior, Gabriel has a habit of disappearing from police custody and danger appears to dog him.

Gabriel is searching for a ‘stone’, its value ‘beyond human imagination’, that will help bring a ‘monster’ to justice. When Libby agrees to help him, she plunges her life into grave danger where no one is safe.

A cult who call themselves The Awakened, a gangland thug and his henchman, a female assassin, a detective chief inspector from Scotland Yard, and even the serial killer, all become inadvertently embroiled in the chase for the stone and the pivotal force of Gabriel.

As the death toll rises, Libby is forced to face herself, learn the true value of life and the potent significance of the Sleeping Warrior within.

Review:
I generally thought this was an entertaining story with a number of interesting, seemingly independent threads that eventually wind together into a neat little package. There were some interesting characters. I particularly liked Libby, Gabriel, Rose and Lars (as we’re supposed to). It was also interesting to see, what would otherwise be considered bad guys, fighting on the side of good. That seems to be a sub-theme (is there such a thing?) of the book. Actions alone aren’t enough to judge the shade of one’s soul. I never could decide if it’s supposed to be religious fiction or not. But if it’s so subtle that I can’t decide, then it’s not obvious enough to bother me.

While most of the many twist were wonderful, there were occasionally some that were unbelievable. One in particular, the second hospital scene, almost ruined the book for me. Not just because it pushed the envelope of credibility, but also because it came out of no-where (When did everyone have time to plan this?), and because the whole book changed tone and direction after it. It really felt to me that there was a perceivable breach in the plot-line and that series of scenes is the epicentre of the rupture. A lot must have happened behind-the-scenes, because a number of characters suddenly started acting out of character all of a sudden and kept it up until the end.

At end the reader is left with questions. I don’t mean loose threads. The characters are left with the same questions. There are just some things—like what Gabriel actually is, or what Shinar did to be pursued, or what led Shinar to hunt the stone—that no one learns the answer to with any certainty. The reader can guess, but has no way of knowing if they are right.

Lastly, though not a criticism by any means, if you’re looking for a steamy PNR, this isn’t it. There are no sex scenes. There is love, of sorts, but no real romance. That’s not the point here.

All-in-all, I really enjoyed The Sleeping Warrior and would be up for reading more of Ms. Bain’s work.