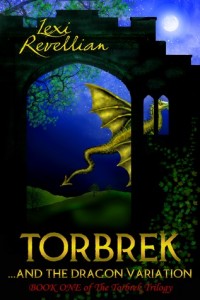 Last year sometime, I grabbed a copy of Lexi Revellian‘s novel, Torbrek…and the Dragon Variation from the Amazon free list.

Description from Goodreads:
An adventure story with daring deeds, dragons, friends, foes and romance – and no darned elves.

When Tor saves the Princess from the terrifying, fire-breathing dragon and delivers her to the handsome knight she is destined to marry, nothing is quite as it seems; the dragon is overweight and hasn’t breathed fire for years; the Princess and her supposed suitor don’t hit it off; and Tor shouldn’t be in the rebel cavalry at all because she’s a woman disguised as a man. Which doesn’t help when she is attracted to a fellow soldier…

Meanwhile, studying the records of the legendary Hundred Knights, cold-blooded agent Corfe unearths a secret about Tor that even she is unaware of, a secret that makes ruthless King Skardroft very interested in her, and will change the outcome of the battle for the kingdom.

Review:
I thought it was cute. I expected the humour to be a lot more ridiculous than it was. You know, a little Monty Python-like comedy. I would have been fine with that. I was up for a laugh. But I was pleasantly surprised to find that, though there was humour, there was also a solid story here.

I also really enjoyed the fact that Tor was truly a strong female lead. So often female warriors in fantasy are described as well trained, ruthless soldiers but then are shown to actually be rather soft—despite their training, being unwilling to kill when it comes down to it or traumatised by having to do so and keep up the strong front. Invariably a man comes to her rescue and she is grateful. Not Tor. She never wavers and the men around her let her be strong without needing to come to her rescue. I loved that.

Many of the characters grow significantly throughout the book. Skardroft learns the value of human contacts. The princess learns the value of self-sufficiency. Pom learns about courage. Some experience love for the first time, others face loss and acceptance. That’s a lot to squeeze into 250 pages. But it’s accomplished without feeling rushed.

All in all I found the whole thing a pleasant read.