I borrowed a copy of Some Kind of Magic through Amazon and bought A Boy and his Dragon from Dreamspinner. Both are by R. Cooper and part of the Beings in Love series. 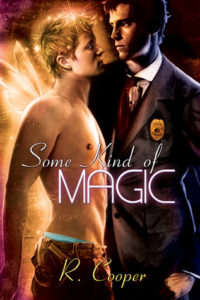 Description from Goodreads:
Being a police detective is hard. Add the complication of being a werewolf subject to human prejudice, and you might say Ray Branigan has his work cut out for him. He’s hot on the trail of a killer when he realizes he needs help.

Enter Cal Parker, the beautiful half-fairy Ray’s secretly been in love with for years—secretly, because while werewolves mate for life, fairies…don’t. Ray needs Cal’s expertise, but it isn’t easy to concentrate with his mate walking around half-naked trying to publicly seduce him. By the time Ray identifies the killer—and sorts out a few prejudices of his own—it may be too late for Cal.

Review:
A sweet little story of a werewolf and his mate, a human-fairy hybrid. I quite enjoyed it. I thought Ray’s frustration and Cal’s flirting were a hoot. However, the situation is supposed to have gone on for two years! Considering the events of this book are a matter of days and I was already getting tired of it, two years would be intolerable. Because mostly it all comes down to two people not saying the things that need to be said and that’s a plot device that doesn’t work well for me.

There is no on-page sex, but all the longing kind of made up for it. And I quite like the idea of Beings, with shifters, pixies, fairies, etc being out in society. Plus, each having species’ characteristics and tht they have to contend with legends that aren’t always true. Again, a sweet story that kept me interested enough to want to read the next one. 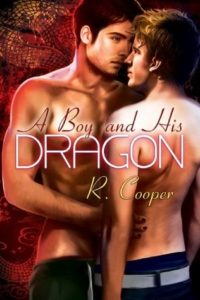 Description from Goodreads:
Arthur MacArthur needs a job, and not just for the money. Before he dropped out of school to support his younger sister, he loved being a research assistant at the university. But working for a dragon, one of the rarest and least understood magical beings, has unforeseen complications. While Arthur may be the only applicant who isn’t afraid of Philbert Jones in his dragon form, the instant attraction he feels for his new employer is beyond disconcerting.

Bertie is a brilliant historian, but he can’t find his own notes without help—his house is a hoard of books and antiques, hence the need for an assistant. Setting the mess to rights is a dream come true for Arthur, who once aspired to be an archivist. But making sense of Bertie’s interest in him is another matter. After all, dragons collect treasure, and Arthur is anything but extraordinary.

Review:
It was cute. I’ll give it that and I did enjoy it as a cute, fluffy read. But exactly like book one, it’s a book who’s plot 100% depends on two men not saying what needs to be said. In fact, it pretty much is the plot. The dragon won’t tell the human what he wants, despite hinting at it, and the human won’t believe the hints or admit to his own desires. Thus, they pine for each other for 240 pages. Again, it was cute and well written, but that wasn’t really enough for me. Plus, I thought the ‘tragic sister’ (who’s life didn’t really seem so horrible that her brother had to sacrifice so much for her, she certainly seemed capable enough) was a pointless and over-used plot device. I’d read more of the series though.