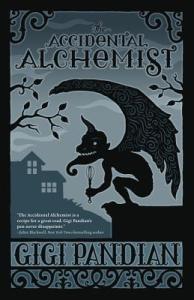 I received a review ARC of Gigi Pandian‘s The Accidental Alchemist from Netgalley. (Isn’t that a great cover?)

Description from Goodreads:
When Zoe Faust–herbalist, alchemist, and recent transplant to Portland, Oregon–begins unpacking her bags, she can’t help but notice she’s picked up a stow away: a living, breathing, three-and-half-foot gargoyle. Dorian Robert-Houdin is no simple automaton, nor is he a homunculus; in fact, he needs Zoe’s help to decipher a centuries-old text that explains exactly what he is. Zoe, who’s trying to put her alchemical life behind her, isn’t so sure she can help. But after a murder victim is discovered on her front porch, Zoe realized she’s tangled up in ancient intrigue that can’t be ignored.

Review:
I’ll admit that the writing in this book is generally readable and, even though I had an ARC, the editing wasn’t worth comment. The problem was that I was simply bored throughout the whole thing…that and I became increasingly annoyed with the food references.

Because I can’t be bothered to give the book any more of my time by counting myself, I’m going to quote another reviewer here. “I did a quick word count and the “cook/ed/ing” was mentioned 79 times. SEVENTY-NINE-BRAIN-NUMBING-TIMES.” I’m not exaggerating when I say that at least, AT LEAST, 50% of the book is dedicated to what Dorian is cooking or what type of smoothie Zoe is making. And it gets worse.

I assume I’m not the only person who has that one friend who is a health nut and constantly trying to convert his/her (in my case her) friends to ‘the lifestyle.’ Zoe is this friend and I liked finding her in a book I was reading for fun even less than having soy milk, non-caff, chai lattes with my own real life fad eater friend.

None of Zoe’s healthy eating lectures felt natural. What it felt like 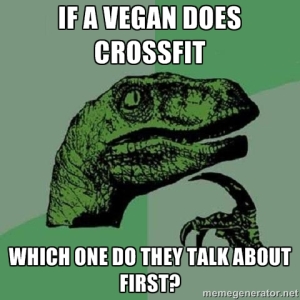 was the author taking an opportunity to use her book as a soapbox. (There are even recipes in the back! How is that relevant in a fantasy novel?) All of which is annoying, yes, but it was also detrimental to the book. Because when, for example, three kids are missing and it’s imperative they be found quickly, all of the tension and buildup evaporates when the main character stops to make herself a quick smoothie, noting of course that she added extra chia seeds for the energy boost.

Further, when half the book is dedicated to food descriptions and another 20 or so percent dedicated to lectures on healthy eating and the benefits of certain herbs and such, there is very little book left for plot, character development and world building. So, let me address this here. There isn’t any of the last two.

There is no character development. To call them flat is an understatement. There is also no world-building. Zoe is just a random Alchemist in an otherwise, presumably, average America. What little plot there is is WEAK. The romance comes out of nowhere and has no basis. The mystery might as well have been a series of random events broken up by a series of silly and unbelievable Poirot/Jessica Fletcher/Columbo style ‘investigating.’ And the little bit of Zoe’s past that is revealed is just thrown in willy-nilly for no apparent reason.

Lastly, and as an admittedly pedantic point, a gargoyle is designed as a waterspout, having a trough for water to flow through. I don’t believe Dorian is meant to have one. It’s never mentioned in his description. Thus, wouldn’t he be a chimera or a boss?

So, for a super-food freak who likes to revel in their obsessive eating issues like others roll with religion, this book is a must-read. For the rest of us, you know, normalish people…I wish I hadn’t bothered.