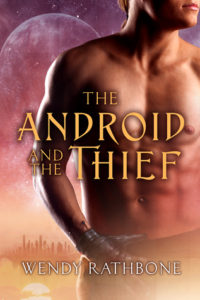 I received a copy of The Android and the Thief from the author, Wendy Rathbone.

Description from Goodreads:
Will love set them free—or seal their fate?

In the sixty-seventh century, Trev, a master thief and computer hacker, and Khim, a vat-grown human android, reluctantly share a cell in a floating space prison called Steering Star. Trev is there as part of an arrangement that might finally free him from his father’s control. Khim, formerly a combat android, snaps when he is sold into the pleasure trade and murders one of the men who sexually assaults him. At first they are at odds, but despite secrets and their dark pasts, they form a pact—first to survive the prison, and then to escape it.

But independence remains elusive, and falling in love comes with its own challenges. Trev’s father, Dante, a powerful underworld figure with sweeping influence throughout the galaxy, maintains control over their lives that seems stronger than any prison security system, and he seeks to keep them apart. Trev and Khim must plan another, more complex escape, and this time make sure they are well beyond the law as well as Dante’s reach.

Review:
I liked but didn’t love this. Mostly because I really think it wanted to be a light fluffy read (and mostly was), but starting with a fairly detailed gang rape killed any real chance of succeeding with this. And I don’t even think showing the rape was necessary. The reader could have known it happened without all the details.

Setting the need for the rape scene aside, I liked both characters. They were each cute and cute as a couple. I can’t say I really felt any real chemistry between them, but I liked them. Beyond liking the characters though, I was iffy on a lot of the book. So many things pulled me out of it.

All in all, I’ll say this was a book I don’t regret reading, but I wasn’t blown away by it either. It was ok.