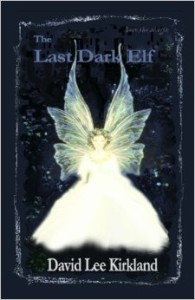 I snagged a (presumably) used paperback copy of David Lee Kirkland‘s The Last Dark Elf, from Goodwill (.70¢). The book only has one other review. It’s on Amazon, from another woman here in Saint Louis. So I kind of wonder if I just picked up her copy. Sorry, that sort of supposition amuses me.

Description from Goodreads:
The Last Dark Elf is a contemporary fantasy, set primarily near D.C and St. Louis. An Irish immigrant named Scully unwittingly befriends the last surviving dark elf–a character bent on entangling Scully in the ancient war of the elves over the face of magic in the world.

Review:
I thought this was an all right read, maybe not right up my alley but still pretty good. It basically focuses on an ‘honourable man’ and his attempt to reorient his understanding of what is good or evil when his clearly defined worldview is upended by the sudden appearance of magic and mythical creatures. It was often thought provoking, but also I thought occasionally over simplified.

The main character is a devout Catholic, as are his two closest confidants (one is his priest). So for much of the book, what is ‘good’ or ‘evil’ is very Biblically-based. There is no real room for alternative faiths here. By the end of the book, Scully had been forced to face the fact that his belief system wasn’t all encompassing, but neither he nor anyone else in the book ever ventured away from the Christian worldview (at all).

Thus, what could have, in other circumstances, led to deep discussions on the subjective nature of belief or the one-sided tendency to pigeonhole only some as spiritually virtuous or even the danger of valuing dogmatic labels over the importance of human (or other) actions, came across as simple reiterations of what is or isn’t good for the theoretical soul. It was, in my opinion, a real lost opportunity.

HOWEVER, I came into reading this book with very little idea of what it was about or even what genre it fell into. There is a very real possibility that the adherence to Christian/Catholic doctrine and the emphasis on the tenets deeming the soul above all worth was intentional on the author’s part.

I actually liked Scully’s Catholicism. It wasn’t at all preachy, but it gave his character a little depth. Especially since honour, loyalty, duty and maybe belief were sub-themes of the book. However, Father Pisarski and the general tone of the book did take on a very religious feel on occasion. Not quite proselytising, but it made the book feel like I should classify it as Christian Fantasy (with capitals). It was a bit off putting, especially since at least one of the characters happily sitting down to pray with the good father, was an elf and decidedly not Christian. But, maybe that was the intent all along. Perhaps this was written to be just that, Christian Fantasy, and I’m just slow on the uptake.

The story itself is an interesting one. It has a very straightforward narration style. It’s told in a very linear fashion. It really is just a litany of things that happen to the main character. He does this, then this happens, then someone says this, and then they go here and do that, etc. No big twists or unexpected reveals, but an entertaining journey none-the-less. And honestly, though I occasionally wanted to gag at his self-congratulatory nature I did admire Scully’s dedication to doing what he deemed the ‘right thing.’

I did kind of sense a contradiction in this same courageous tendency to stick by his moral guns, though. Sometimes accepting that you’ve been wrong and being willing to change and grow takes a lot more strength of will than simply staying the course. Scully is portrayed as having accepted the dual nature of good and evil that magic and the mystical creatures epitomise, without compromising his faith. However, I can’t actually see this as possible.

While Scully is shown to struggle with the challenge of accepting the new view of reality and maintaining adherence to his Catholic beliefs, the reader is never fully aware of how he balanced them in the end. I never saw that they did. More specifically, accepting the neutral nature of creatures traditionally seen as evil could alienate him from his soul’s ‘true path,’ that Father Pisarski was always harping on about.

The writing was very readable. The main character’s Irish verbiage and word order made it feel formal though. Words are swapped around and there is a notable lack of contractions. As an example, here’s the first two sentences of the book: “Always good it is to see an old friend at Flanagans, the finest of all the Irish pubs gracing Washington, D.C. More than just good—and close to wonderful it is—when he owes you a bit of money and appears after a long absence.”

I didn’t hate this, it jut took a few pages to get used to. But I did have to wonder if he would really have such a strong Irish lilt if he’d lived in D.C. long enough to have been an alter-boy there, which is something he references when talking about Father Pisarski (who wasn’t Irish, so couldn’t be from the old country). Seems he’d sound more American and drop fewer Yodaisms if he’d been here since childhood. But, not a big issue for me.

I also happened to like the way Scully is (or becomes) aware of subtle meanings of things. Elves are apparently the masters of not-quite-lying, but not being wholly honest either. It was fun to follow Scully as he ferreted meanings out. But I appreciated that the reader wasn’t hit over the head with the meanings of things, as if too stupid to figure them out for themselves.

All in all, I enjoyed the book well enough. I think someone who shared the characters (and probably the author’s) beliefs would get a lot more out of it. But it still wasn’t a bad read.