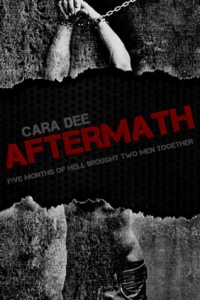 Description from Goodreads:
Austin Huntley and Cameron Nash are like night and day. One is a family man, works in a nice office, drives an expensive car, and is content to be content. The other one is an antisocial car mechanic with a short fuse.

Some things don’t change. Others definitely do.

After surviving a five-months long kidnapping together, they struggle to return to normalcy, all while realizing that they’re more drawn to each other than they ever could’ve imagined.

Review:
I generally enjoyed this book. It wasn’t anywhere near as dark as I expected. I loved the narrator’s and the men’s voices (not to mention the characters themselves). The dialogue was believable. It was well edited and there were some pretty hot sex scenes. Yum. I seriously considered giving it five stars, based purely on my enjoyment level. But in the end, I decided it didn’t really deserve a full five. So, I’m going with a four star rating.

What held my rating back a bit was that some aspects of it weren’t very believable.  For example: the previously straight man, having his first sexual experience with another guy, takes charge and knows EXACTLY what to do, where everything is, and has no awkward fumbling at all. Really, wouldn’t’ he need at least a little direction or be at least a little nervous? Nope, he’s balls to the wall confident and competent.

The relationship seemed rushed too. I get that the men had been in close quarters together for 5 gruelling months, but it felt like they just woke up one morning and decided to love each-other and then both seamlessly did just that with no discussion or difficulties. It made for some great ‘Ahh’ moments, but should it really be so easy?

I loved Cam (Austin too, but Cam stole the how for me), but his Aspergers didn’t seem to contribute anything. Most of his behaviours could have been explained by the anxiety disorder, so a secondary diagnosis seemed surplus to requirement.

I also thought that the author wimped out on the abductions a little. A sadist kidnaps 10 men, cuffs & cages them, beats the living daylights out of them, half starves them, but doesn’t molest a single one in any fashion. I’m not saying I wanted a rape scene in there anywhere, but (fiction being what fiction is) if 10 women had been kidnapped in this book they’d all have been ravished within an inch of their lives. Half of them would probably be impregnated and the reader would probably have had to sit through every agonising detail of it all.

The book does a good job of describing the men’s struggles to come to terms with the fact that they, 10 vibrant men, had been overpowered and abducted by a single madman. This was hard for them to accept, as it felt like a loss of manhood. But The fact that they only had to endure physical and mental abuse felt artificial, like there was some notable line of beyond this point go only the truly depraved that the author didn’t want to be associated with. But, honestly, she created a depraved bad guy. He needed to go there IMO, so that the characters could fully face the perceived loss of  their masculine position. Just my opinion, of course, and it does somewhat suggest that all violent offenders must also be sexual offenders, which is of course a fallacy, but in this case I think the book would have been stronger for it.

Lastly, I’m not a huge fan of the sappy hearts and flowers endings. This one definitely had one. Really, the epilogue had no other purpose than to cram the happily ever after down the readers throat. I could have done without it, or at least without it being quite so overpoweringly cheerful.

All in all, I’m well up for reading the next in the series. I loved the characters, I especially appreciated that at 33 and 40 they were full-fledged adults. I thought the writing was crisp and the story was sweet (even if not particularly plausible). Definitely not a waste of my time.