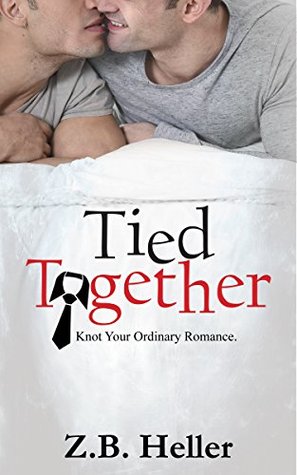 I have two copies of Z. B. Heller‘s Tied Together apparently. I requested and received a copy of the audiobook from Audiobook Boom and I picked a copy up from Amazon when it was free.

Description from Goodreads:
Ryan Keller had it all when he came out in high school; accepting parents, friends and his own credit line for J. Crew. His cocky attitude and good looks got him what he wanted, including samples off the man meat buffet. Then he found his favorite dessert, Brandon. But Brandon wasn’t sending out a rainbow vibe so Ryan was sent to the land that crushes dread, the friend zone.

Brandon Ford was buried so deep down in the closet that clothes from the seventies had a better chance of coming out. His anxieties of acting on his desires could keep a therapist entertained for hours. Even though he did his best to build his emotions out of bricks, it was no use against Ryan’s charms.

Follow Ryan and Brandon’s relationship from high school, to college and beyond to find out if they will be Tied Together.

Review:
I started this book in the Audible format, which I received through AudioBoom. The narration by Derrick McClain was fine, but I basically hated the story. I stepped away from it for a while and then finished it in ebook format. I can read faster than listen and I just wanted it done.

Mechanically, the writing is fine. But Ryan is a total douche bag and he never redeemed himself. I was further infuriated that he was so horrible, but it was Brandon put in place to apologize before they got their happily ever after. Sure, Ryan, had a minor apology too, but it was too little too late for me. He was horrible, start to finish and I hated him so much it ruined the book for me.

Then there is the pacing. OMG, the pacing. The book starts out pretty well. It’s funny and Ryan had an interesting voice. But it quickly devolved into forced humor and actions that MADE NO SENSE. Then 12 years pass. 12 years people! Two characters who have known each-other and been best friends for years, who are in love with each-other have one fight (because of one does something that I couldn’t believe he would actually do) and they walk away without ever speaking again. WTF? They still go to the same university, you’d think they might pass on campus. And who gives up love that easily? No one, that’s who. (Not that Ryan deserved any better.)

But 12 years pass. From a literary point of view, that’s a lot of important time to lose. Then when the two get back together, the reader isn’t given the getting to reknow each-other scenes either. They go from 0-bed instantly, then 3 weeks pass. What? More important lost time? They have another ridiculous fight, make up and 3 years pass. MORE TIME GONE, time that I as a reader needed to see.

At 65% new characters were introduced, characters who became important but the reader is not invested in because they are new at 65%. Apparently they are characters from other books, but that doesn’t help much in the grand scheme of things. There is slut shaming, the characters are vile towards women in general and the representation of the nice, accepting, middle class family versus the poor, homophobic trailer trash family was cliched and predictable.

This was an all around fail for me.