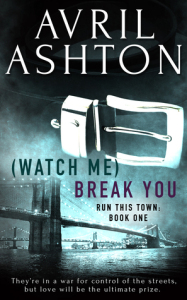 I bought a copy of Avril Ashton‘s (Watch Me) Break You.

Men. Women. Drugs. Dima Zhirkov’s favorite things. Add in the element of danger and he should be right as rain. But not today. It’s not working, hasn’t for a long time. He’s grasping at the flimsiest of straws to prove he’s indeed strong enough to run his streets. Until he sets eyes on him. In the midst of a room full of strangers, Dima is drawn to a man as cold and dangerous as he’s beautiful. Captivated, Dima embarks on a ruthless campaign to get his new toy into bed.

Xavier “X” Storm is content to pull the strings while someone else handles the day to day dealings of his gang, The Rude Boys. He’s after what Dima holds closest—the Coney Island streets. He contracts out the job of killing the Russian, except Dima isn’t that easy to kill. When he suddenly shows up in X’s path, tempting him to indulge in the dirtiest play, he finds Dima isn’t all that easy to shake, either. His cocky attitude and rough submission tempts X to go where he’d vowed to never return, and they plunge head first into an affair fueled by possessive obsession.

Sex and pain Dima can handle, and X delivers the most depraved kind. Their connection is explosive, their games addictive, but Dima can end it whenever he wishes. He doesn’t see that X is breaking him down, giving Dima everything he wants and even more than he ever thought to need. By the time he realizes who X is and what he wants, Dima is raw and bullet riddled. It’s run or fight. And Dima doesn’t back down. Neither does X.

Review:
This book has great reviews, but I’m just not seeing the appeal. The whole thing felt like one long, sustained and unwavering note. It got a little old.

The book is primarily sex. I knew that going in, so no complaints. But it seemed to be on repeat. I’m not sure if X and Rush had a lot of sex or if I just read the same sex scene 5 times. The plot was weak and for two men running large criminal organizations, they seemed to do very little actual work.

I hate to say it, but Rush was written as a woman. Really. He cried all the time, was described as needy and sexually hungry (all at the same time). He often fainted when he climaxed. X joked about knocking him up and told him how much he liked seeing him in his kitchen. Not to mention Rush was always on the receiving end in bed.

Safe words here played the same role.  X and Rush spent the beginning of the book enacting real violence, waving guns and throwing threats. But the second anything drifted toward sex, X would stop to ensure Rush remembered his safe word. What?

My biggest issue however, was that once Rush had elbowed his way into X’s life the whole rest of the book was just a broken record of “I love you,” “I need you.” “Stay with me.” In the last half of the book “love” was used 36 times. I get that the author was ensuring that the reader understood the depth of emotion these men felt (even though the whole book occurs in maybe a week), but it was too much. I felt beat over the head with it and eventually wanted to gag on it.

Generally, I love some broken men. I love crazy violent pairings. But this was too much of a good thing, with not enough of anything else to balance the cray-cray.

The writing itself was fine and I liked finding people of color as main characters for a change.  The editing could have used a little more attention, though. All in all, I think this one just wasn’t for me.