I bought a physical copy of the illustrated novel, Father Figure, by Kichiku Neko (author) and TogaQ (Illustrator). I’ve included the full cover (front and back) simply because it’s so freakin’ gorgeous. Art is subjective, of course, but this is the sort that ticks all my boxes. 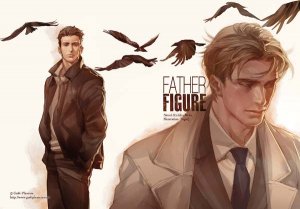 Description from Goodreads:
A deep obsession with his estranged father leads Gabriel down a dangerous, twisting path.

Review:
The description doesn’t tell you much about what to expect in this book and I think it’s the sort you really need a little heads up on, because a more accurate synopsis would be full of trigger warnings. I suspect it would roll right against a lot of people’s hard limits.

It’s a scary proposition, this book. The thing is though, none of it is used as titillation. There is sex, yes, but unless non-con is your kink, it’s not sexy.  This is neither a romance nor erotica. It’s almost Transgressive Fiction and is uncomfortable in much the same way Lolita is. It concerns cringe-worthy subject matter, but in such a way as to push boundaries and force concerted thought on the matter. It’s worth working through one’s own discomfort to face it.

It’s also an emotional roller-coaster.  You hate the main character, or what he’s doing, at the same time that you want to comfort him. You see the end coming and want to avoid, even as you know it can’t really end any other way. (Though, those familiar with Yaoi mangas, which this very strongly resembles, will likely hold out hope of a happy ending. I know I did. Such unlikely pairings are far more common in that media.) I teared up before I reached the last page.

There are 19 illustrations in the book and each one is a piece of art. Honestly, it’s why I bought the paper version instead of the digital one. Because it’s so darned pretty!

Despite being a hard read, I’m thrilled to have read it. I find Guilty Pleasures, the author and illustrator’s publishing partnership where I bought the book, difficult to navigate. But from what I can garner, all the other works are ‘in progress’—mangas published per chapter. I don’t read that way, too impatient. But should they publish another full work, I’ll be first in line to buy it.