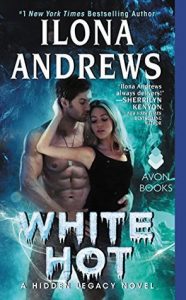 I borrowed White Hot, by Ilona Andrews, from my local library. I reviewed the first one last in 2015.

Description from Goodreads:
Nevada Baylor has a unique and secret skill—she knows when people are lying—and she’s used that magic (along with plain, hard work) to keep her colorful and close-knit family’s detective agency afloat. But her new case pits her against the shadowy forces that almost destroyed the city of Houston once before, bringing Nevada back into contact with Connor “Mad” Rogan.

Rogan is a billionaire Prime—the highest rank of magic user—and as unreadable as ever, despite Nevada’s “talent.” But there’s no hiding the sparks between them. Now that the stakes are even higher, both professionally and personally, and their foes are unimaginably powerful, Rogan and Nevada will find that nothing burns like ice …

Review:
Can I start by saying that I think this series has some of the most off-putting covers ever? I really hate them and they really don’t represent the tone of the books? Do yourself a favor and don’t judge the books based on them. Ok, having said that, moving on.

It’s been a while since I read the first in this series, Burn For Me, and I admit that I’d forgotten a lot of the details. I was still able to catch up and follow the story well enough. However, I seem to remember loving the characters a lot more than I did here. I mean, I liked them, but with all the action and running around and killing people and blowing things up, I don’t really feel like the story slowed down and gave me much time to get to know them again.

One of the things I like most about Ilona Andrews is their ability to write alpha males who are all alpha, but still able and willing to support and encourage their kick-butt partners (not to mention the strong females). You get that here in much the same way you do the Kate Daniels books and that’s what keeps me coming back. No doubt I’ll be finishing this series out too.

Lastly, I appreciate that there is a pleasantly diverse cast in the Hidden Legacy universe.