I borrowed an audio version of Convenience Store Woman (by Sayaka Murata) from Hoopla. 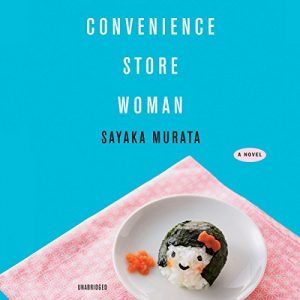 Keiko Furukura had always been considered a strange child, and her parents always worried how she would get on in the real world, so when she takes on a job in a convenience store while at university, they are delighted for her. For her part, in the convenience store she finds a predictable world mandated by the store manual, which dictates how the workers should act and what they should say, and she copies her coworkers’ style of dress and speech patterns so she can play the part of a normal person. However, eighteen years later, at age 36, she is still in the same job, has never had a boyfriend, and has only few friends. She feels comfortable in her life but is aware that she is not living up to society’s expectations and causing her family to worry about her. When a similarly alienated but cynical and bitter young man comes to work in the store, he will upset Keiko’s contented stasis—but will it be for the better?

This was the breath of fresh air I needed after reading a really heavy book yesterday.

I loved this. Other than ending quite abruptly, I have almost no complaints. I found Keiko’s narrative style effective, her unwitting social commentary insightful, and a lot of her attempts to communicate hilarious (in a subtle sort of way). I know this is a short review, but I honestly just want more.

I borrowed a copy of Into the Mist, by Maya Banks, through Hoopla.

Hostage recovery specialist Eli Chance has a secret. He was born a shifter. A freak of nature.

While on a mission, Eli’s men and their mercenary guide are exposed to a powerful chemical agent, and suddenly his secret has become easier to hide. Now he’s not the only one with the gift. But for his men, this “gift” is becoming more and more of a curse.

Tyana Berezovsky’s brother Damiano was the guide for Eli’s team and was the worst affected by the chemical. As he grows increasingly unstable, Tyana fears she’s going to lose him to the beast he is becoming.

Tyana will do whatever it takes to help him, even if it means using her body to go after the one man she thinks holds all the blame—and possibly the cure. Eli Chance.

Anyone who has read my reviews very often will have come across at least one in which I’ve said that I used to think I hated the romance genre and refused to read it. Then, one day, I Realized that it wasn’t actually romance I hated but the gender representations common in romance books. I’ve learned that if I’m selective, I can quite enjoy romance.

Into the Mist is not one of those books. It is full of all the gendered BS that I hate and avoided for so very long. Tyana is supposed to be strong and talented and skilled, but she’s a walking disaster of TSTL. Her primary character development is being a rape victim as a child. And sadly, that’s more than anyone else in the novel gets.

The paranormal aspects of the book are so sketchy and poorly thought out that I finally just decided that they’re there as window dressing to world the characters live in. And that world is so ill-defined that I didn’t even know if shifters were out or not. So, basically the world existed simply to give the characters different places to have sex. And the sex wasn’t even that hot.

All in all, as my first Banks book, I was disappointed. Additionally, the narrator did a fine job. However, I hated the fragile, breathy way she played Tyana. It only exacerbated my frustration with the book.

I borrowed an audio copy of The Miser of Mayfiar, by B. C. Beaton from the local library.

#67 Clarges Street is unlucky. Rental agent Palmer blackmails butler Rainbird and staff to stay for pittance of wages. From Scotland for the London Season, dazzling orphan Fiona sets her sights on haughty Earl of Harrington, and gives the servants first cut of her gambling winnings, insists she is the sole heir to her father Roderick Sinclair, a miser with a failing heart.

Honestly just not very good. Nothing is even remotely consistent. It was going for a Georgette Heyer feel, I think, but didn’t manage it.

The book starts out well enough, with the beautiful Miss Fiona’s introduction. She’s so cow-eyed and dumb you can’t help but assume it’s a sham. And it is. She’s a smart, capable card sharp. (Though we’re never told how she came to these skills.) Then about mid book it all evaporates and she becomes just as stupid as she pretends. But only as long as it assists the plot. Then, she’s suddenly smart, brave and capable again. The villains are cartoonish and the love interest has several unbelievable changes of heart for no apparent reason and goes against social convention without explanation. Also, he almost rapes Fiona, hardly a hero.

This has a nice new looking cover. So, I borrowed it from the library. But I later learned it was originally written in 1987. Maybe that explains a lot. But even for the late 80s, bad writing is bad writing. To her, credit Lindy Nettleton did as much with the manuscript as a narrator probably could. The narration is just fine. The book is not.