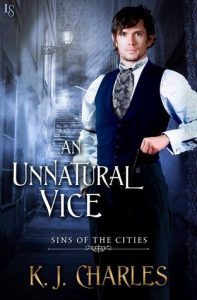 I received an ARC of An Unnatural Vice, by K. J. Charles, through Netgalley. And since I’m vacationing in Florida along with the lovely Tropical Storm Cindy, I’ve had lots of time to read. Luckily, where I am there are bucketsful of rain, but little wind and no lightning, so I can still sit outside, on the lovely screened porch, listen to the rain, look at the water and bask in the negative ions as I blissfully read without guilt because I’ve not taken the kiddos to a proper beach, just let the frolic in the pool. Everyone is happy.

Description from Goodreads:
Crusading journalist Nathaniel Roy is determined to expose spiritualists who exploit the grief of bereaved and vulnerable people. First on his list is the so-called Seer of London, Justin Lazarus. Nathaniel expects him to be a cheap, heartless fraud. He doesn’t expect to meet a man with a sinful smile and the eyes of a fallen angel—or that a shameless swindler will spark his desires for the first time in years.

Justin feels no remorse for the lies he spins during his séances. His gullible clients simply bore him. Hostile, disbelieving, utterly irresistible Nathaniel is a fascinating challenge. And as their battle of wills and wits heats up, Justin finds he can’t stop thinking about the man who’s determined to ruin him.

But Justin and Nathaniel are linked by more than their fast-growing obsession with one another. They are both caught up in an aristocratic family’s secrets, and Justin holds information that could be lethal. As killers, fanatics, and fog close in, Nathaniel is the only man Justin can trust—and, perhaps, the only man he could love.

Review:
Another lovely book by Charles; she just so rarely lets me down. I very much enjoyed Justin and Nathaniel’s fiery passion, most when it was still in the enemies stage of this enemies to lovers story. The little bit of mystery was easy to figure out, but still pleasant, and I’m still on the hook for who the over-all, big baddy is. (Hopefully this will be revealed in the next book. I don’t like to be strung along too long.)

I did feel the two men went to declarations of love too quickly. I thought the enemies, to friends, to lovers was well paced. But then suddenly there was love and sentimentality and such, and I thought that was a leap. I also very much disliked Nathaniel’s sense of moral superiority and the fact that Justin acquiesced to it. The tone of ‘let me show you how wrong your life is and how to live properly’ grated on my nerves from start to finish.

All in all, however, I finished this pleased as punch and can’t wait or the next one. 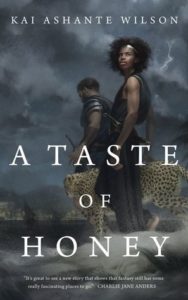 I borrowed Kai Ashante Wilson’s A Taste of Honey from my local library.

Description from Goodreads:
Long after the Towers left the world but before the dragons came to Daluça, the emperor brought his delegation of gods and diplomats to Olorum. As the royalty negotiates over trade routes and public services, the divinity seeks arcane assistance among the local gods.

Aqib bgm Sadiqi, fourth-cousin to the royal family and son of the Master of Beasts, has more mortal and pressing concerns. His heart has been captured for the first time by a handsome Daluçan soldier named Lucrio. in defiance of Saintly Canon, gossiping servants, and the furious disapproval of his father and brother, Aqib finds himself swept up in a whirlwind romance. But neither Aqib nor Lucrio know whether their love can survive all the hardships the world has to throw at them.

Review:
First, 500 stars for that cover. It is amazing. I’d have read the book just for that. Yes, I really would.

Second, wow, I loved this writing style. Yes, it was problematic. At times it became overly florid and some of the dialogue is anachronistic, but mostly I loved it. I especially appreciated the difference in dialect between Aqib and Lucrio.

Fourth, I love the way gender norms were convoluted. Yes, if I’m honest, I often find this a cheap plot device and in a way it is here too, but I think it’s done usually well and I really enjoyed it. There were several points in the book where I just had to set it aside and laugh. This is never a bad thing to have happen, in my opinion.

Fifth, setting the book in a culture that more closely resembles Islam than Christianity. It’s fantasy, so it’s neither really, but so often you can see the roots of the imaginings and here it’s a refreshing change to find something beyond the strictures of the Christian church.

My only real complaints are the occasional missing word that I didn’t think was intentional, but rather editing mishaps, and  that I didn’t feel overly connected to the characters. You don’t get to know Lucrio at all really and Aqib always felt a little detached; his life speeding by too fast to really grab ahold of. But over all, I really enjoyed this and will be searching out more of Wilson’s writing. I know, for example, that he has some free reads on Tor.com. 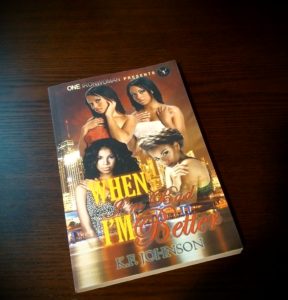 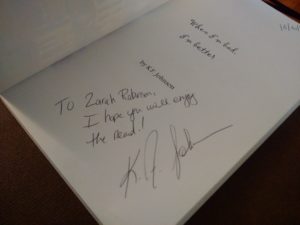