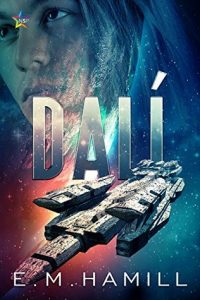 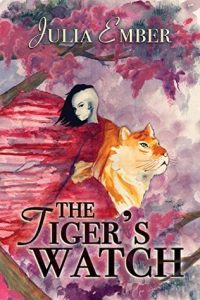 I received a copy of Julia Ember‘s The Tiger’s Watch from Netgalley.

Description from Goodreads:
Sixteen-year-old Tashi has spent their life training as a inhabitor, a soldier who spies and kills using a bonded animal. When the capital falls after a brutal siege, Tashi flees to a remote monastery to hide. But the invading army turns the monastery into a hospital, and Tashi catches the eye of Xian, the regiment’s fearless young commander.

Tashi spies on Xian’s every move. In front of his men, Xian seems dangerous, even sadistic, but Tashi discovers a more vulnerable side of the enemy commander—a side that draws them to Xian.

When their spying unveils that everything they’ve been taught is a lie, Tashi faces an impossible choice: save their country or the boy they’re growing to love. Though Tashi grapples with their decision, their volatile bonded tiger doesn’t question her allegiances. Katala slaughters Xian’s soldiers, leading the enemy to hunt her. But an inhabitor’s bond to their animal is for life—if Katala dies, so will Tashi.

I had really high hopes for this fantasy with a gender-fluid protagonist. But if failed me on almost every level, except that the writing is mechanically and editorially fine.

Point one, the gender-fluid protagonist was a heroine. I don’t mean to force an identity on anyone in real life, but in fiction there are certain behaviors, character traits and tropes that show up almost exclusively with YA female characters and YA male characters. And while Tashi waffled about whether they’d like to wear pants or a dress and while the author scrupulously avoided ever discussing secondary sex traits, Tashi behaved 100% like your average, unlikable, angsty, YA heroine. And I hate those heroines. In fact, I’ve largely given up YA literature at all to avoid them.

I simply did not feel Tashi was gender-fluid in any way other than that the reader was told so and a brief discussion on pronouns. And if an author is going to use gender-fluidity without engaging in it, I don’t feel it’s being respectfully handled.

But even outside the common YA characteristics, I just plain couldn’t like Tashi. They were supposed to love one man, but lusted over another that they’d just met, even as her love was dying. How does that make a believable plot? What’s more, they’re weak, small-minded, selfish and a traitor. There is no excuse for the ill-thought out, selfish actions they took. Even if it all works out in future books, that doesn’t excuse what they did in this one. I actively hoped for them to die at the end.

Then there was the interplay between them and the enemy captain. For one, they somehow coincidentally got chosen to serve him. How convenient for the plot! But nothing about their interaction was believable. They were chosen as a servant to an invading army’s captain. But the two of them bickered and fought and treated each other like equals. WOULD NOT HAPPEN. Nothing in their situation was believable.

Then there was the psychic human-animal connection. I loved this idea. But it was barely ever utilized. In fact, we hardly even got to see it. Such a let down.

Then the darned thing ended on a cliffhanger. The only reason I haven’t given it a one-star, is that the writing is fine, as I said. 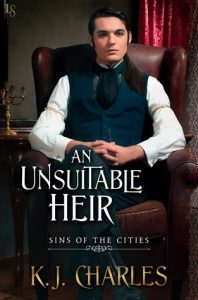