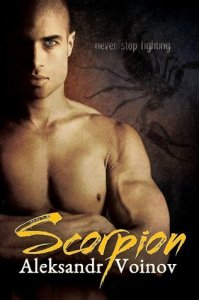 I bought a copy of Aleksandr Voinov‘s Scorpion.

Description from Goodreads:
Kendras is a casualty of war: injured, penniless, and quite possibly the last surviving member of the only family he’s ever had—the elite fighting force known as the Scorpions. When a steel-eyed mercenary offers him medicine and shelter in exchange for submission and a secret task, Kendras has no choice but to accept. He is a Scorpion; he’ll do whatever it takes to survive.

But his true goal is to rebuild the Scorpions. Neither Steel’s possessive nature nor Kendras’s shattered foot can keep him from finding the last of his brothers, or the mysterious leader of the Scorpions, the man who held Kendras’s heart long before Steel tried to take it for himself.

The goal is simple, the situation anything but. To rescue his leader and escape from Steel for good, Kendras must fight through a morass of politics and intrigue where enemies may be allies and even allies have hidden agendas. But Kendras isn’t only fighting for his lost lover and tribe—he soon realizes that nothing less than the birth of an Empire is at stake.

Review:
There is plenty to love about this book—lots hard men, loyal soldiers (one of my favourites), hot sex, PoC MCs (I’ve had a wonderful run of these lately), a twisty-turny plot, a little master/slave, some gentle love, more barely scraping adulthood acolytes/novices/servants/etc gagging for it than you can shake a (your) stick at, atmosphere, wonderfully descriptive writing, good editing, etc. A lot to love. It’s dark and gritty, with an ending that I suspect only seems happy(ish). Yep, lots to love.

I thought the beginning was a little shaky, but it stabilised satisfactorily. And while I know this isn’t meant to be set in the modern west and thus can’t be expected to live by our mores and customs, I did think the pervasive sexual victimisation felt overplayed. It’s not that I have a problem with it in a plot; it was just EVERYWHERE here. Every organisation, from the prisons, to the army, to the church, to the nobility seemed to blithely rape or train for ‘service’ their powerless. Thus, most of the characters had been raped at some point, some to more effect than others and many ritualistically (rape being institutionally scripted before X occurs, etc). It’s one of those books in which there only seem to be predators and prey, no…you know…normalish people and that left it feeling monochromatic as a culture.

But the characters were marvellous and there were a lot of small sparkly moments, like Steel’s odd emotional desperation or Widow’s anomalous love or Kendras’ constant low-level want or Sylvan’s ‘weakness.’ Yeah, not a perfect read for me but certainly not one I’m complaining about having spent an evening with. I think ‘yum’ is the appropriate descriptor