I picked up a copy of Jodi Hutchins‘ The Grim Assistant from the publisher (Nine Star Press).

Postal carrier and amateur surfer, Samantha Diaz, lives an uncomplicated life. Well, other than helping her sister with childcare, crushing on her unavailable customer, Lauren Brennan, and catching as many waves as possible before hurricane season begins. Suffice to say, she isn’t looking for much more, but when Lauren invites her to a monthly game night at her house, Sam happily agrees.

When Sam sets out on an early morning surf, the last thing she expects to do is die, but a sudden thunderstorm thrashes offshore, creating a riptide that steals Sam’s life. She awakens to a snarky woman named Margo speaking cryptic nonsense. Not only does she claim to be one of the many Grim Reapers, or Grims, in the world, Margo makes Sam an offer: she’ll bring Sam back from the dead, as long as she becomes Margo’s temporary assistant. Sam accepts but soon realizes the deal was too good to be true, and the consequences she faces may be worse than the death she dodged.

I think the best way to describe my relationship with this book is to admit that I checked my progress at the end of EVERY chapter. I was literally counting down until the end. The reason is that I was BORED. This book seemed focused on all the wrong places, the pacing was inconsistent, as was Lauren’s character. It’s predictable, repetitive, and written largely in tell (instead of show), so I didn’t feel connected to anyone.

I borrowed a copy of Alys Clare’s book, The Woman Who Spoke to Spirits from the local library.

London, 1880. “I’m dreadfully afraid someone is threatening to kill my wife …” When accounts clerk Ernest Stibbins approaches the World’s End investigation bureau with wild claims that his wife Albertina has been warned by her spirit guides that someone is out to harm her, the bureau’s owner Lily Raynor and her new employee Felix Wilbraham are initially sceptical. How are the two private enquiry agents supposed to investigate threats from beyond the grave? But after she attends a s�ance at the Stibbins family home, Lily comes to realize that Albertina is in terrible danger. And very soon so too is Lily herself …

I wasn’t thrilled with the first person, present tense narrative choice. I thought it really distanced the reader from the characters. But beyond that I mostly really enjoyed this book. I’ll grant that I wasn’t particularly surprised a the identity of the villain, having guessed it very early on, and I thought there was a subtle centering on Felix that made him feel more the main character than her (when I also sense it was meant to be her). But there was good writing, interesting characters, not-quite-banter (but working in that direction), and a couple moral quandaries I appreciated thinking on. Mostly though I really liked both Lily and Felix, as well as them together. I look forward to reading future books in this series. 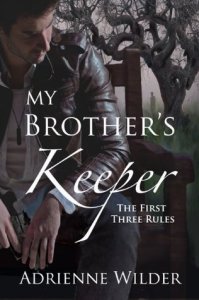 I grabbed The First Three Rules (My Brothers Keeper, #1), by Adrienne Wilder, from the Amazon KDP free list.

Description from Goodreads:
Marshal Jon Foster lost his purpose and his sanity the day he saw the image of his dead brother. The distraction saved Jon’s life but cost the lives of innocent people including his best friend and partner. It was a price for survival Jon couldn’t live with and was sure he’d never understand.

Driven by grief and guilt he tried to escape his past by fleeing to a small town in the middle of nowhere. Only instead of peace, the memories festered. Then the offer of a stick of gum from a stranger changes Jon’s life and puts him on a road out of the nightmare he’s trapped in.

Ellis Harper has lived the past twenty years isolated from the outside world and sole caretaker for his mentally disabled brother, Rudy. While Ellis loves his brother, he longs for a life he’ll never be able to have. Shut away, his days consist of chores, endless cartoons, and games of Go Fish. A world that seemed to have no end until an innocent misunderstanding turns Ellis and his brother into a target for a town bully.

It’s a fight Ellis can never win on his own but thanks to a chance meeting with a stranger, he doesn’t have to. What begins as a new journey in love for both men quickly unfolds into something neither of them could have ever imagined.

Review:
I think this is a case of finding the right reader. Though the book could have done with a little more editing, it was fairly well written and Jon, Ellis and Rudy were likeable characters. (Even if Ellis could have easily been a woman. He acted much like a typical virginal het romance lead.) So there are a lot of reasons for people to like this book.

However, it turns out not to fall in my preferred reading arena. The main reason is that I’m not particularly turned on by the whole clumsy first timer trope. Virgins who looks at their partners with big innocent eyes and ask things like, ‘What do I do?’ and say things like, ‘but I want to make it good for you.’ do nothing for me. In fact, all the gentle instruction sex turns me off. It’s at all not my kink, so to speak. I know some readers love this stuff, but I’m not one of them. This made it hard for me to really appreciate this book.

As for the rest of the plot, the supernatural aspect of it is VERY light. Maybe it picks up in the rest of the series, but there is very little of it here. There is insta-love and then a lot of convenient events pushing the characters together, but it’s all very sweet, if you like that sort of thing. It’s also a little on the unbelievable side. But again, if you like the sort of thing, it’s not too bad.

I would have given this a solid three stars until I reached then end and the stupid, precipitous cliffhanger. Grrr. For the right reader, this will probably be a big winner.