Somewhere around the internet I was given an Audible code for a copy of books 1-3 of The Last Vampire, by  R.A. Steffan and Jaelynn Woolfe. 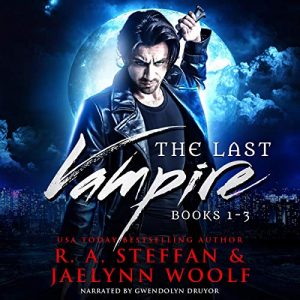 Interestingly enough, several weeks back I listened to a book called Forsaken Fae and one of my biggest complaints about it was that it turned to be a spin-off of a spin-off. So, even though it was labeled book one, it didn’t really stand alone very well. I didn’t at the time know which of the several books in the series it was based on or needed to be read before it. As it turns out, it’s these books…and I had at least these first 3 sitting in my Audible account the whole time. 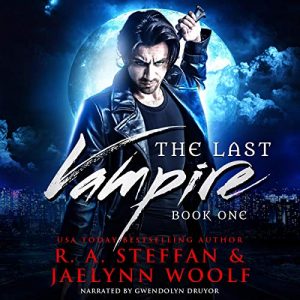 There’s a smokin’ hot dead guy locked in my garden shed.
That part’s bad enough. But now, he’s trying to get out.

Growing up, my father always told me that I’d come to a bad end, just like my mom did when I was a kid. Hearing that kind of shit when you’re little eventually gets to a girl, but I can’t say I ever expected my ‘bad end’ to involve an angry vampire with a severe case of iron deficiency and a panty-melting English accent.

Maybe I shouldn’t be surprised. Ever since my mother was assassinated, I’ve felt like there was something vast and frightening hidden beneath the fabric of the world. Something none of us are supposed to know about.

So far, finding out I was right hasn’t been nearly as satisfying as I’d hoped. I guess the trick will be staying alive long enough to shout ‘I told you so’ from the rooftops.

But before I can do that, I really need to figure out if the vampire who just bit me is one of the good guys or not.

Meh, I didn’t hate this. The writing is fine and I appreciated some of the humor. But the relationships aren’t developed at all. The hero and heroine literally have two less than 10 minute conversations (she literally has a 10 min alarm set during the second one) and then he’s rescuing her, they’re jumping into bed, and they’re apparently a couple for life. And I don’t just mean that makes the sex feel rushed. Even the friendship feels out of nowhere. Then the book ends on a giant cliffhanger. So, I’m pretty “meh” on the whole thing. I also didn’t particularly care for the narrator. There was nothing objectively wrong with the performance, but I found it a little on the whiny side. 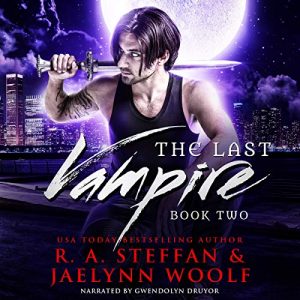 My father has been kidnapped by my worst enemies.

Either that, or he willingly sold me out to them.

Whatever the case, I’m going to find him. Mind you, this would be a lot easier if every Fae in Chicago wasn’t already out for my blood.

They’re not getting it, though.

The only one who’s getting anywhere near my blood is the seven-hundred-year-old vampire who saved me. Yes, there are times when I’m convinced he’s not quite right in the head, but so far he’s the only supernatural being I’ve met who sees me as a person rather than a chess piece.

To the rest of them, I’m nothing more than the walking, talking evidence of a war crime. To him, I’m something else. He calls me a loose thread in the tapestry of his forgotten past, but he looks at me like I might be the key to his future.

The rest of them tell me I’m demonkin. They say I’m a succubus-human hybrid who shouldn’t exist.

One thing is very clear, though. My father is carrying a secret bigger than I ever dreamed, and I’m damn well going to pry it out of him.

I just have to get him back from the Fae first.
Because, hey—what could possibly go wrong?

I’m finding that I don’t much like Zorah. I find her whiny and prone to too-stupid-to-live decisions (the narrator’s style might have something to do with this impression), and I’m finding that the woman-gagging-for-sex feels like it plays too closely into the subtle Western myth that woman can’t be trusted with their own sexuality because they’re just inherently weak to their own impulses. Plus, being part succubus was just really cliched and predictable. I do find some of the banter between Rans and her funny and there’s really nothing wrong with the writing itself. I’m just not much liking the main character and I’m a bit bored with the story as a whole. 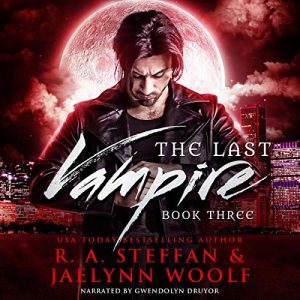 After giving myself up to the Fae, I expected to become the latest casualty of a war that should have ended centuries ago. Instead, I ended up inextricably bound to the last vampire on earth.

My life since the Fae marked me has become unrecognizable. Inside, I’m still the 26-year-old waitress who struggled with working two jobs while being serially dumped by a parade of disgruntled boyfriends. Now, I’ve somehow become a figurehead, coveted and despised in equal measure by two warring supernatural races.

Can I trust the fragile bond connecting my heart to the unbeating heart of a vampire? Every instinct I possess tells me to pull back… protect myself… protect him. But every time I try to run away, I end up back in his arms.

Alliances are shifting. Old resentments are flaring. Both my father and I are now chess pieces in someone else’s grand strategy.

No more. I’m done with being a pawn.
It’s time to up my game.

Having finished this 3rd book in the series (the last I have, since I was listening to the compilation of the 1st 3 books), I’m still pretty meh on the whole thing. Plus, I’m finding that I really resent that I’ve read 3 books (600+ pages, almost 21 hours of audio) and gotten no conclusions in any of the books. They each just randomly stop. Which, of course, means there won’t be any kind of satisfaction in book 4 or 5. So, I’d need to read or listen to a further 600 pages or another 20+ hours of audio to get a single conclusion. The simple fact is that I’m just not that invested. Hoopla has the audio of books 4-6, so they’re available to me (even if I didn’t want to buy them) but I don’t think I’ll bother. Which means I’ll never know how it ends and have just wasted 20+ hours of time listening to what is essentially half a story.

And let me tell you it is FULL of filler to stretch the story over 6 books; you especially feel that in this 3rd book. I was just bored with a lot of it, especially all the sex/succubus stuff. By which I don’t just mean the sex (there’s not actually that much of it, compared to what could have been), but all the testing this and trying that, the fetish club and play and requisite description of the outfits, her sexy shows, etc, etc. I was BORED. The whole thing drags like the middle of a book…like the middle it is.

I was also seriously tired of all of her “woe is me, no one could love me” doubt of Rans and the veracity of their relationship. It was tedious and silly. The man had already bound himself to her FOR LIFE. I think it was abundantly clear how he felt, so her continued doubt felt like the contrived plot device it was.

Again, the actual writing itself is fine and the audio versions seem pretty well done. It’s not an issue with quality I have, but with the style of breaking books into serials that have to be read as a whole. This is a personal preference kind of thing, but I’m pretty done with it.