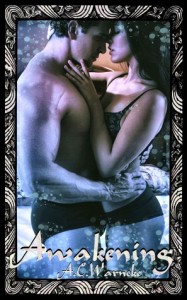 I grabbed a copy of A.C. Warneke‘s Awakening from the Amazon KDP list.

Description from Goodreads:
THE QUEEN HAS BEEN DEAD FOR THOUSANDS OF YEARS

IN A MOMENT OF FIERCE PASSION…

Celeste Hamilton is having one last adventure before her real life begins: a once-in-a-lifetime trip to Europe with her best friend. On her last days in Paris she meets the mysterious Adamanteros Vespari and he makes her feel reckless. She comes alive beneath Adam’s touch, burning for his possession.

Her craving for Adam threatens to consume her and Celeste knows she cannot stay or she’ll cease to exist. Slipping out of his arms in the middle of the night, she makes her escape before she loses herself in him completely. But the world she returns to is no longer familiar and her friends aren’t what they seem.

AND AWAKENS SOMETHING DEEP WITHIN CELESTE…

When Adam comes back into her life she finds that she was lost before she was even born and with his she is finally found.

Review:
Awakening was an fun enough PNR read and a slightly off centre take on the whole vampire lore. (The Apocritae aren’t actually supposed to be vampires, but close enough.) Warneke created an interesting dilemma, threw out a fairly massive red herring, and actually wrapped the book up before the end–something that seems to be becoming a rarity.

I quite liked a lot of the characters. I especially liked Auberon. I felt really wretched for him. I have no doubt the payoff will come in the next book, Reawakening, and I’m fairly confident that I know how that will happen. I just wish someone would drop the hint to him. Seeing him suffer so nobly was almost painful. Oddly, Adam and Celeste were probably my two least liked characters in the book. They were far too wrapped up in one another for there to be much room left over for anything else. Their meeting was a stunning example of insta-love/lust and so there wasn’t really any need to get to know each other, so the reader didn’t really get to know either one either. On top of that I’m not really a bit fan of literary hearts and flowers, so their and the narrators constant reminders of how in love they were started to tick me off. I got it and could have done without being reminded of it 15 thousand more times.

I do have to say I find it unlikely that Celeste would have really triumphed. I don’t want to post a spoiler, but suffice it to say that her opponent, the overall baddie, could have and really should have killed her at any time. Celeste after all was much weaker, untrained, and far too naive. But like so many super-villians, pride and the need to talk until the end drug the whole thing out far longer than was realistic.

Awakening is apparently a sequel to Blight, but I didn’t know that until after I had finished this one. Having read Blight might have given me a clearer understanding of the the Apocritae society better. I had no problem following the plot, but until I realised there had been a previous book I intended to comment that the basic world-building seeming a little light. Despite not reading the prequel I still enjoyed the book. It seemed pretty well written. 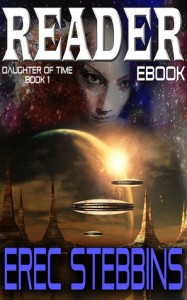 I downloaded Erec Stebbins‘ Sci-Fi novel Reader (Daughter of Time) for review from the Story Cartel.

Description from Goodreads:
She was a VICTIM: enslaved after her parents’ murder. She was made a MONSTER: deformed, modified against her will. She became a MESSIAH: opening the Orbs and leading a galactic rebellion.

Share the cosmic quest of seventeen-year-old Ambra Dawn, Reader, and the most unbelievable step in the adventure – will be your own.

Review:
Reader (Daughter of Time) has an interesting premise. Poor Ambra Dawn never had a chance at a normal life, but still proves herself incredibly resilient. The story is told in first person from her perspective, when she is about 17. I generally dislike first person narratives, but in this case the reader (not Reader) is given a very clear reason that she is telling you her story, so it works.

At about (almost exactly, really) 50% her personality changes quite abruptly from passive victim to strong aggressor. This was absolutely necessary for the plot and the development of her character, but it felt very much like it came out of nowhere. Yes, something happened to instigate the change, but so very, very much had already happened to her that it almost didn’t seem like it should have effected her so much.

I especially liked that everything was tied into science in some fashion. High level 4 dimensional space-time related science that often flew right over my head, but I appreciated it all the same. There are a lot of really good quotes too. They head the chapters, providing a clue to what is coming.

I have to admit, embarrassing as it may be, that like clapping for Tinkerbell inPeter Pan I sent my prayer/strong thought/wish into the universe, as requested. Surely that’s a sign of a book that has effected someone. I believe the book was written with a young adult audience in mind (so the author mentions in the acknowledgements). Certainly a teenager could, and probably would, enjoy the book, but it is joyously free of all of the ridiculous angst that usually accompany YA books. As an adult I quite enjoyed the book.

Description from Goodreads:
A divorce lawyer by trade, I have been soured on love for years. I haven’t had a date in months and now my childhood best friend—you know the über pretty and together one—has hired me to handle her divorce. If she can’t keep a man then there is no hope for me. Then a chance meeting on an elevator changes everything. Lucan O’Reilly is good looking, wealthy, and has an apartment to die for. He always seems to know just what’s on my mind. The perfect man, actually. But is it all too good to be true…

“Shh, I’m ready to tell you,” he whispers and with that I hear him speak a word in my mind. Vampire. Unfortunately, this is the least of my concerns for a new relationship fraught with secret ceremonies, blood hungry enemies, and saving Lucan’s soul.

I did enjoy Abri though. She was a feisty heroine who knew her own mind and didn’t easily bend to the overprotective nature of her literary mate. Said mate, Lucan, was a pleasant surprise in and of himself. He was kind and considerate and even sexy. What he was not was any sort of overbearing alpha male. It was nice to see that mould broken. He was exceedingly wealthy though. (I guess an author can’t be expected to break them all.) An annoyingly large portion of the book was dedicated to showcasing his money–his cars, clothes, jewellery, fancy restaurants, high price real-estate, etc. All of which he, of course, showers her with. After a while it just felt like a plot prop.

The book could do with another round of edits. There are a lot of missing words, mostly pronouns and particles. There are also a few word choice issues. The repeated use of the word least when lest is meant, for example. The story was still perfectly readable, enjoyable even, but it would be hard to miss the mistakes.

All-in-all I found it a sweet little romance novel with a few weak attempts to broaden the plot. The whole Serge drama fell a little flat with me. He didn’t feel like enough of a threat to warrant as much attention as it was given. The whole vampire reveal seemed a bit ho-hum. No one seemed bothered in the least by it. Even the scary high council just felt like cheery geriatrics. Be that as it may, it was still a fun little read.