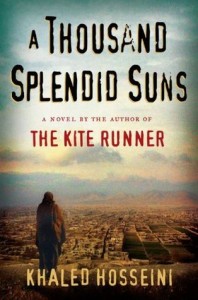 I picked up a copy of Khaled Hosseini‘s A Thousand Splendid Suns from a used bookstore.

Description from Goodreads:
Born a generation apart and with very different ideas about love and family, Mariam and Laila are two women brought jarringly together by war, by loss and by fate. As they endure the ever escalating dangers around them-in their home as well as in the streets of Kabul-they come to form a bond that makes them both sisters and mother-daughter to each other, and that will ultimately alter the course not just of their own lives but of the next generation. With heart-wrenching power and suspense, Hosseini shows how a woman’s love for her family can move her to shocking and heroic acts of self-sacrifice, and that in the end it is love, or even the memory of love, that is often the key to survival.

Review:
This was not a winner for me. Yes, I get it. All Afghan men are cruel, power-hungry monsters who lord over their wives and all Afghan women are abused victims who are only beautiful in their capacity for sacrifice. (See, I’ve saved you from having to read the book now.) If I was a conspiracy theorist, I might call this anti-Afghanistan propaganda. I’m not a conspiracy theorist. I don’t actually think this is anti-Afghanistan propaganda. But, with the war and all, publishers don’t seem to be trying paint Afghanistan in even a neutral light. Seemingly every recent popular book concerning the territory has this same theme. That makes reading this book an exercise in redundancy. I did not enjoy it and it felt incredibly arrogant to me. I don’t care if the author was born (not raised, mind you, but at least born) in Kabul. The whole thing still felt like arrogant judgment against a people who have already had to weather one hell of a storm. Even worse, in its attempt to be so quintessentially tragic it was also utterly predictable. All you ever had to do was think what the worst thing that could happen next was and there you had it. Sometimes you didn’t even had to do that, the trajectory of the plot-line was so blatantly obvious that it was practically written in neon. 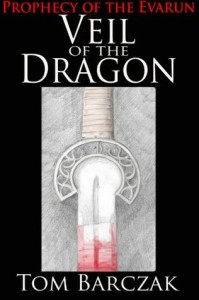 I picked up a copy of Tom Barczak‘s Veil of the Dragon from the Amazon free list. I chose to read it at this time as it was the book of the month in one the forums I frequent.

Description from Goodreads:
Chaelus, Roan Lord of the House of Malius is raised from the dead by the hand of a child. His kingdom stolen by the evil dragon, Gorond, Chaelus’ only hope to reclaim his throne rests with the child knight who saved him, the heretical order to which the child belongs, and the truth about Chaelus which they alone protect.

Review:
This is a really hard book for me to review, because I’m of two very different minds about it. It is beautifully written. The use of language is almost awe-inspiring. It’s just pain pretty and its slow, measured recitation gives it an eerie, heavy feeling of mystical gravitas.

However, that same atmospheric writing, no matter how beautifully the words are strung together, comes across as emotionally flat and provides only an anorexic outline of what is actually happening in the story. In the beginning, it took me a long time to figure out what the story was about and even then I never felt wholly immersed in it.

I decided at some point that it felt very Biblical. Not only because there is a very obvious Christian influence (which there is, lots and lots of similarities to the Jesus story…well, I suppose the model could have been Osiris, but as the authors American I’m guessing not) but also in the way that the book gives very little deep details and leaves a lot open to interpretation.

I gathered almost nothing of the characters histories, motivations, or personalities as well as the world’s circumstances, peoples, cultures, or anything else. The scope of the telling is very narrow and as a result, a lot is left out. And again, it’s lyrical and pleasant to read, but it’s a style that annoys the living daylights out of me because I need that depth to sink my teeth into. I found reading this comparable to reading The Psalms. It related information to me in a pleasant matter, but that’s not quite the same as providing me an engrossing story.

That isn’t to say the story isn’t an interesting one. It is. It’s about redemption and recognising both the potential for grace and the human susceptibility the shadows that same light casts within each of us. It’s an interesting idea. And while I don’t like the way it’s executed, as a personal preference, it accomplishes what it apparently set out to do. So, I’m happy to recommend it to fellow readers, but I’m also a bit glad to be done with it. 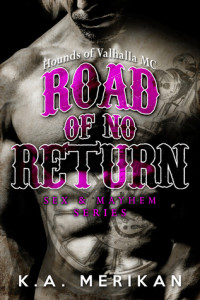 I was provided an ARC of K. A. Merikan‘s Road of No Return.

Description from Goodreads:
Zak. Tattoo artist. Independent. Doesn’t do relationships.Stitch. Outlaw biker. Deep in the closet. Doesn’t share his property.On the day of Stitch’s divorce, lust personified enters the biker bar he’s celebrating at. Tattooed all over, pierced, confident, and hot as hellfire, Zak is the bone Stitch has waited for life to throw him. All Stitch wants is a sniff, a taste, a lick. What follows instead is gluttony of the most carnal sort, and nothing will ever be the same. Forced to hide his new love affair from the whole world, Stitch juggles family, club life, and crime, but it’s only a matter of time until it becomes too hard.Zak moves to Lake Valley in search of peace and quiet, but when he puts his hand into the jaws of a Hound of Valhalla, life gets all but simple. In order to be with Stitch, Zak’s biker wet dream, he has to crawl right back into the closet. As heated as the relationship is, the secrets, the hiding, the violence, jealousy, and conservative attitudes in the town rub Zak in all the wrong ways. When pretending he doesn’t know what his man does becomes impossible, Zak needs to decide if life with an outlaw biker is really what he wants.As club life and the love affair collide, all that’s left in Zak and Stitch’s life is mayhem.

Review:
When I was 18 or so, I lived with a guy. We’ll call he D., shall we? In a lot of ways, he was wonderful. He was sweet, loved to cook and equated sex with love. And while we were young and hardly tantric gods, he always strove to let me know I was appreciated. *sigh*

D. however had had a bit of an unfortunate childhood, bouncing from foster home to institution to foster home until a wonderful family adopted him as a teen. (Do you know how rare that is?) Despite therapy to address his oppositional defiant behaviours, he never developed any real coping mechanisms. NONE. As a result, disagreeing with him, even on small matters, was tantamount to a verbal attack. And any attempt to hash out larger issues or have an actual argument (which, lets face it, relationships need occasionally) would throw him into a blind rage. He’d lash out, hit and randomly destroy things. (Never me, just things.) Our apartment took more than one thrashing.

D. was scary at those times. But no matter how angry or scared I was, I wasn’t ever blind enough not to see that a good bit of his ill-timed anger was actually hurt, confusion or plain frustration that he had no other way to express. At those times, my heart always ached a little for him. Even more so when I had to face his lost, betrayed face after the anger ebbed. The puffed up gorilla melted into a wounded puppy. (Not that I ever would have told him he gave that impression.)

I say all this because, for a lot of this book, Stitch reminded me a lot of D. I recognised so many of D.’s quirks in him that it was a little frightening. (But also made him feel very real for me.) Especially the way he could do something shockingly inappropriate and not grock why I was angry. Or the way he could sometimes go from irate to conjoling almost instantly, as if I was the one who’d been upset in the first place. Or the way he would react with almost mindless violence, only to then be bewildered by the aftereffect of his own actions.

Because I loved D. for a little while I understood Stitch’s emotionalism. I don’t think I would have otherwise. My own past endeared him to me. But honestly, that grace only reaches so far. I may have understood his outbursts, but I can’t make the same claim for some of his other actions. For example, I wasn’t ever sure how Stitch made the leap from closeted, will-never-act-on-it gay to seeking out Zak between one chapter and the next.

Or that for much of the book, he came across as a little dim or at least like the kind of guy who isn’t well versed in verbally expressing himself. Then he would randomly come out with seemingly soul searing statements that were romantic, sure, but way out of character for him.

Having said all of that, if in the years since I last saw D. he has managed half the personal growth Stitch does toward the end of this book he’d be quite the catch now. It is toward the end of the book though. The vast majority of it is Stitch trying and largely failing to come to terms with his own proclivities. It’s hugely satisfying when he finally does, but I thought the book drug a bit in the middle as he came to accept himself.

This is largely because there was just too much darned sex. Yes, I did say that. It got in the way of the plot (which isn’t really all that thick to start with). Plus, every single stage of his gayness had to be addressed separately. (I don’t know how better to phrase that.) As a result, the only thing we see Stitch and Zak do is have lots and lots of sex. We’re told that they walk the dog, cook together, fix up the house, etc. but we never see any of it. We also never see any of their personality that isn’t directly related to their sexual orientation, the motorcycle club or Holly & Chrystal. So their personalities feel a little weak, as do all of the club members.

So I’m a little torn about how I feel about Road of no Return. I liked the ending. I liked Zak a lot (even if he did get a little wife-like at one point). I liked that Stitch finally came into his own and I loved his  vulnerable moments. But I didn’t like the WTF at 85% and feel the book ended with the issue unresolved. I didn’t care for the insta-lust. I also thought there was a bit of a cheesy undertone to a lot of the dialogue. In the end I could easily go either way, liking the book or feeling ambivalent about it. I didn’t dislike it. I just didn’t love it either.

Best line of the book: “Not to mention he’s most probably in a closet so deep he’s, like, in Narnia.”