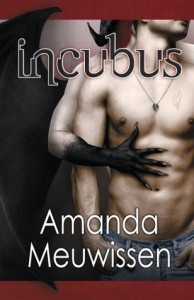 I grabbed a copy of Incubus, by Amanda Meuwissen, from the Amazon free list.

Description from Goodreads:
Nathan only ever wanted a normal life, but for him, life, family, and love are anything but normal.On the other side of the Veil, dark and light fae exist outside the knowledge of most humans. Nathan Grier was born human, but his twin brother Jim is a changeling. On the run since they were children, time for both of them is running out. Turning to fae hunter Sasha Kelly for help, Nathan must soon face his growing feelings for the other man while trying to save himself and his brother from a fate worse than death.

Review:
Having just finished Incubus, I think I can say with some certainty that Ms. Meuwissen didn’t set out to write a book. She wanted to write a television screenplay. The chapters are even referred to as episodes and every chapter or two completes a mini adventure (as one would expect from an hour long weekly show). Actually, I can be even more specific. Ms. Meuwissen wanted to write a Supernatural spinoff/fanfiction television show. I don’t think I’m the first to point out the obvious similarity to the show and its characters. Nathan would be Dean and Jim would be Sam. (It has been literally years since I sat down and watched a primetime television show, so if I’m catching such a similarity it must be pretty obvious.)Also like popular, ongoing television programs, the book doesn’t wrap up by the end. In fact, between all of the distracting side adventures and the rather heavy focus on the romance, the main plot of saving Nathan from his dark fae bounty was lost. It felt very, very much like watching a show week after week and then finally realising that due to its new-found popularity, the writers, producers, etc have decided to add endless filler to stretch it into another season, and then another and then another, until you no longer even remember where it was originally going anyway. It was well written. I liked the characters and I liked the plot. I just didn’t care for the plotting. The book is way too long, there are too many forays into adventures that go nowhere, and there are a lot of extra bits—Alex and Jim’s issues, for example. All of this sets the series up for future books, sure, but it’s incredibly frustrating to read. Both because the plot feels diluted, but also because you reach the end knowing almost nothing more than you did when you started, which feels like a distinct waste of time.

I did think the GFY aspect was sweetly done. There was very little ‘but I’m not gay’ angst and it therefore felt much more like falling in love with a person, instead of an appropriate gender. I liked that a lot. Now, a lot of people love this book and, being as it feels like a clone of the television show Supernatural, anyone who likes it will probably like the book. If it had been a stand-alone and I didn’t feel like I had just spent two days reading for no final payoff I would probably rate it higher than I am. As it is, I’m going with not baaaad, but could have be soooo much better.

Post review discovery: Big World Netwrok (the book’s publisher) states that their goal is to provide a “… way to enjoy both fiction and non-fiction in an episodic format, not unlike a television series….” So, while I didn’t much care for the format, I have to give the book credit for being true to it and its publisher’s aim. (Plus, I feel a little smug about having recognised it.)

Of course, it goes on to say, “Unlike a traditional novel with a clear endpoint, series on BWN continue for as long as their readers want more and new seasons are renewed. The average series episode is between 4-10 pages…” Which to me means, without end and no hope for a satisfying conclusion. Again, much like almost every TV series I’ve ever become invested enough to try and watch regularly. I’m fairly sure I’ve never actually made it to a final season, final show ENDING. Part of why I stopped bothering. 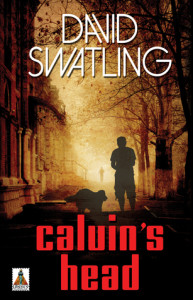 I received a copy of David Swatling‘s novel, Calvin’s Head, from Netgalley.

Description from Goodreads:
Life in Amsterdam isn’t all windmills and tulips when you’re homeless. Jason Dekker lives in a jeep with his dog, Calvin, on the outskirts of the city. A thesis on Van Gogh brought him to the Netherlands, and the love of Dutch artist Willy Hart convinced him to stay. But Willy is gone and Dekker is on the brink of a total meltdown. On a summer morning in the park, Calvin sniffs out the victim of a grisly murder. Dekker sees the opportunity for a risky strategy that might solve their problems. Unfortunately, it puts them directly in the sights of the calculating stone-cold killer, Gadget. Their paths are destined to collide, but nothing goes according to plan when they end up together in an attic sex-dungeon. Identities shift and events careen out of control, much to the bewilderment of one ever-watchful canine. Oscar Wilde wrote that each man kills the thing he loves. He didn’t mean it literally. Or did he?

Review:
Well, this book starts off with a bang, before tapering off to a much more manageable, pleasant pace. It’s told predominantly from the POV of down-on-his-luck Dekker, but also occasionally from that of psycho, Gadget, and the unusually smart dog, Calvin. Yes, the dog has his own POV. Calvin’s contributions feel a bit scattered and pointless for a while (He is a dog after all, how cognisant would you expect his POV to be?), but it really does contribute to the story and he’s incredibly important.

I did wonder why it never seemed to even occur to Dekker to return home to the States, as opposed to remain homeless in Amsterdam. (I imagine the embassy would help.) Seems it would have simplified his situation. I suspect this was supposed to be because he had been in Amsterdam so long he considered it home. But it’s never made clear exactly how long he’s been there or even how old he is, to approximate it based on how long ago he finished the thesis that brought him there in the first place, assuming he did at some point. This lack of age was only exacerbated when he gave Gadget the moniker, The Kid, while guessing he was in his early 20s. This inability to anchor the story in time bothered me, but not enough to put me off reading it.

I also think the interspersed Valentine stories felt gratuitous. I understand why they were included and what they were meant to be providing the book, but it mostly just felt like an easy plot device to add the little bit of extra sex that the plot appeared to be missing. Meh.

While the story had a fair-handed (if anti-climactic) ending, I wouldn’t necessarily call it a happy one. I appreciate this. One of my pet peeves is books that can’t bear to let stories end in realistic languishment. Granted, Dekker is on the upswing, but he’s still uncertain where to go from where is it. It feels much more real than if he’d found his sudden happily ever after.  It’s a thriller after all, not a romance.

Final thoughts: this one had almost everything you could want…a little action, a little romance (of sorts, though I don’t think the word fits well), some feelz, an interesting setting or two, some art history, a cute dog (I’m a dog person, so this tickled me), a bad-bad man, a relatable nice-guy, good writing, etc. I’ll be looking for Mr. Swatling’s next book. 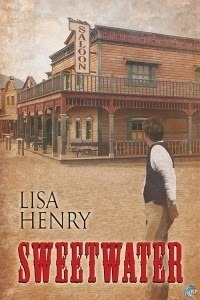 I received a copy of Lisa Henry‘s Sweetwater from Netgally.

Description from Goodreads:
Wyoming Territory, 1870.Elijah Carter is afflicted. Most of the townsfolk of South Pass City treat him as a simpleton because he’s deaf, but that’s not his only problem. Something in Elijah runs contrary to nature and to God. Something that Elijah desperately tries to keep hidden.Harlan Crane, owner of the Empire saloon, knows Elijah for what he is—and for all the ungodly things he wants. But Crane isn’t the only one. Grady Mullins desires Elijah too, but unlike Crane, he refuses to push the kid.When violence shatters Elijah’s world, he is caught between two very different men and two devastating urges: revenge, and despair. In a boomtown teetering on the edge of a bust, Elijah must face what it means to be a man in control of his own destiny, and choose a course that might end his life . . . or truly begin it for the very first time.

Review:
This is the third of Lisa Henry’s books I’ve read this year and I find that I love her writing, but was starting to despair that perhaps we just didn’t share tastes in stories. Fair enough, everyone’s preferences differ. But this book changed my mind. I really enjoyed it. It’s gritty, but still provides the reader a glimpse at a possible HEA (without ever tripping over into sickeningly sweetness, which I have no stomach for).

Yes, some parts of it—ok, the whole first half—were really uncomfortable to read. Even as I understood what drew Elijah back to Harlan, I hated seeing him go. Hated seeing him endure and, not only kick himself, but elicit others to do it for him. I hated it, felt indignant on his behalf. I understood it, but I hated it.

Actually, now that I think on it, that was my relationship with a lot of this story. I understood things, even as I didn’t like them. That can’t be easy for an author to balance. For example, I disliked that a lot of the times Elijah really did come across as the simpleton we’re told again and again that he isn’t. But I also understood that what Elijah was, wasn’t simple, but emotionally isolated and inexperienced. It’s not the same thing.  And it physically hurt my heart to watch him grieve, but I understood the need for it.

Then there was Grady, oh Grady. He was marvellous. Yes, his is a bit of an insta-love, but it’s explained well enough to feel believable. This is mostly because, though he was instantly attracted, he took no immediate action toward Elijah. I really enjoyed seeing him ‘gentle’ the skittish boy.

One final thing I’d like to mention is Henry’s writing. I’m not sure how to explain that it strikes just the right tone for the story told. It feels a little removed from itself, if that makes sense, and occasionally is clipped bare of extraneous prose. It feels right for a story told predominantly from the vantage of a partially deaf character, who can never quite be part of polite conversation, and therefor society.

I’m calling this a raging success and can’t wait to get my hands on some more of Lisa Henry’s work.